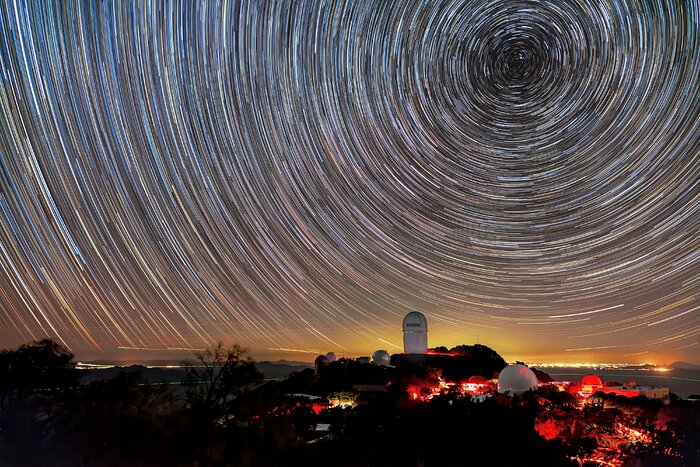 These whirling lines in the sky are the trails of stars after an hour-long exposure above Kitt Peak National Observatory (KPNO), a Program of NSF’s NOIRLab. The trails are shortest around the North Star, Polaris, a star that happens to coincide almost directly with the celestial north pole. The different colors in the trails reflect the different temperatures of the stars, with blue being the hottest stars and yellow/red the coolest. The telescope visible above the horizon is the Nicholas U. Mayall 4-meter Telescope, and the red glow on the mountain is caused by red lights used to ensure the eyes of visitors and staff remain dark adapted at night. The yellow glow on the horizon comes from Tucson, AZ, about 89 kilometers (55 miles) to the northeast. Over the past decade, light pollution like this has increased by 2% a year from many medium-sized and larger cities. To help monitor light pollution in your city, you can participate in the citizen science campaign, Globe at Night.