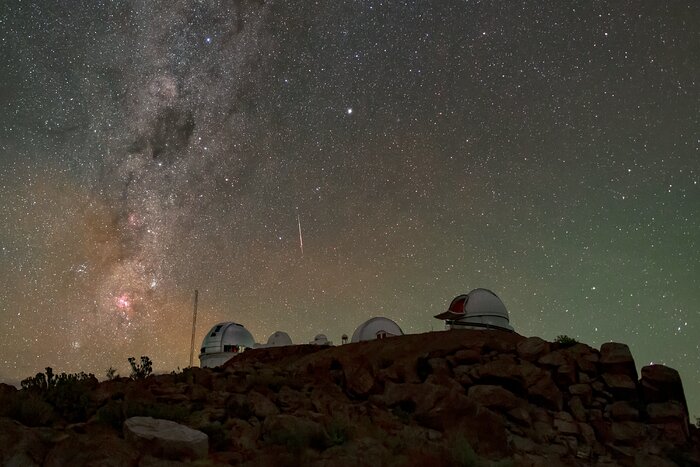 A shooting star streaks above Cerro Tololo Inter-American Observatory (CTIO), a Program of NSF’s NOIRLab. Silhouetted against the night sky and the faint glow of Earth’s atmosphere are (from left to right) the Víctor M. Blanco 4-meter Telescope, the SMARTS 1.0-meter Telescope, the former University of Chile telescope, Las Cumbres Observatory 1-meter Telescope, and the KMTNet 1.6-meter Telescope. This image also features scattered boulders and desert plants (left) of Cerro Tololo. Before being purchased in 1967 to create an astronomical observatory, the land upon which CTIO stands supported a handful of subsistence farmers and goat herders. As the site’s old inhabitants voluntarily left for better prospects in nearby towns, much of the desert surrounding Cerro Tololo slowly returned to its natural state. Native species of desert plants and animals once in danger of extinction have returned to the area, and CTIO now hosts not only cutting-edge astronomical telescopes but also an almost intact desert ecosystem.