From massive young star clusters swaddled in a dust cocoon 600 trillion miles wide to intriguing structural details in a circumstellar disk around a nearby binary star system, the 8-meter Gemini North telescope is providing astronomers with some of their best-ever infrared views of the processes of star and planet formation.

Other results released today from the first few months of routine science operations at Gemini North on Mauna Kea include: early analysis of the stellar population at the very dense center of the Milky Way that finds recent starbirth activity and many faint, low-mass stars; similar observations of individual stars at the center of the galaxy M33 that show a surprising mix of old and new stars; and several insights into quasars, including circumnuclear "disks" or "bars" on the scale of thousands of parsecs across their host galaxies, which may be part of their fuel supply, and tantalizing hints of the structure of the host galaxies behind these enormously bright radio energy fountains.

"Gemini North is the first and only large telescope able to do mid-infrared imaging of faint structures and the distribution of gas and dust within them," says Catherine Pilachowski, Deputy U.S. Gemini Project Scientist at the National Optical Astronomy Observatory (NOAO) in Tucson, AZ. "The large apertures of the two Gemini telescopes will also allow them to look at very small or very distant structures in the near-infrared, such as disks around young stars and the structure of galaxies around distant quasars."

Globular star clusters are among the most ancient objects in the Universe, forming about the same time as the first galaxies. "While their formation remains somewhat of a mystery, they clearly require conditions that are uncommon in the Universe today," says Kelsey Johnson, a doctoral student at the University of Colorado in Boulder.

Based on their early Gemini data, Johnson and collaborators Bill Vacca (Max Planck Institute, Garching, Germany) and Peter Conti (University of Colorado) estimate that three baby globular star clusters deep in the heart of the starburst galaxy Henize 2-10 are less than a million years old, analogous to the first day of life for a human.

Packed into a relatively small area of space, each "super star cluster" is believed to evolve over billions of years into globular clusters like those orbiting the Milky Way.

Henize 2-10, located 32 million light-years from Earth in the constellation Pyxis, is known to radiate as much as 10 times more energy in the infrared than in optical and UV wavelengths, Vacca says. This suggests that there is not only a large amount of newly formed stars and star clusters present, but also a vast amount of dust in these massive objects.

Johnson and her colleagues believe that the three super star clusters must be the "engine" that emits between 60 percent to 100 percent of the infrared energy radiated by the galaxy. "Given the vigorous star formation throughout Henize 2-10 as seen in optical light, it is remarkable that only a handful of these objects could be responsible for all the infrared light we see," she says.

The researchers estimate the temperature of the dust shells surrounding the infant clusters at a minus 130 degrees Celsius (minus 200 degrees Fahrenheit). This may sound cold, but compared to the rest of the Universe - which is just above absolute zero due to slight heating by the cosmic microwave background - the temperatures of the dust shells surrounding the infant stars are "really quite balmy," Johnson notes.

"If we can study objects like globular clusters as they are forming, then we should be able to learn more about the conditions in the early Universe," says Johnson, who is studying the clusters with a combination of Gemini North and radio data from the National Science Foundation's Very Large Array.

"No globular cluster this massive has formed in our Milky Way galaxy for the past 10 billion years," Pilachowski notes. "We could be seeing the outcome of an epoch of major galaxy mergers in the very early Universe. Other Gemini images of faint 'fuzz' around quasars shows us that these galaxy interactions did occur in the distant past."

Daniel Potter of the University of Hawaii Institute for Astronomy used the Hokupa'a adaptive optics system and the QUIRC near-infrared imager on Gemini North to take a remarkably sharp and deep image of the quadruple star system GG Tauri, and the dust disk surrounding the main binary pair, GG Tauri A-B, about 450 light-years from Earth . The Gemini image confirms a gap in the disk hinted at in earlier Hubble Space Telescope images, and shows significant structure directly opposite the gap.

"We clearly see that the gap is real," Potter says. "But such a gap is difficult to explain, because such a thing should last only a few thousand years." One explanation is that it is a shadowing effect from material further inward in the disk, but it could also be a transitory feature due to gravitational interaction between the binary stars.

"The filaments that seem to connect the central binary pair and the ring have been reproduced in general hydrodynamical simulations of circumbinary rings," Potter adds. "A complex gravitational interaction between the disk and the stars may also explain the 'wavy' structure seen on the inner boarder of the ring. This image reveals a complex side of star formation and disk evolution."

Three images discussed this news release are available on the Internet at:

The International Gemini Observatory is a multi-national collaboration that has built two nearly identical 8-meter telescopes open to the worldwide community of astronomers. Both telescopes incorporate new technologies that allow large, relatively thin mirrors to collect and focus both optical and infrared radiation from space.

The Gemini Observatory is managed by the Association of Universities for Research in Astronomy, Inc. (AURA) under a cooperative agreement with the National Science Foundation (NSF). The NSF also serves as the executive agency for the international partnership.

Speakers in the June 4 special session in Room C106 at the AAS meeting will include:

Kelsey Johnson presents her results in a related Gemini poster session in the Exhibit Hall.

Daniel Potter will be speaking at a parallel oral session on Protostellar Disks in Room C104.

Olivier Guyon of the University of Hawaii Institute for Astronomy presents observations of quasar host galaxies on Thursday, June 7, in Session 88, Room C107, 2:00 p.m. to 3:30 p.m. 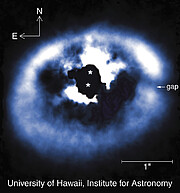 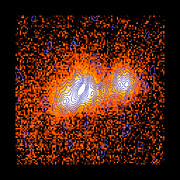 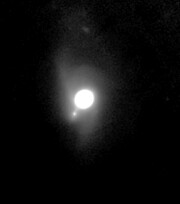 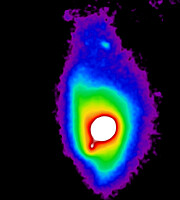