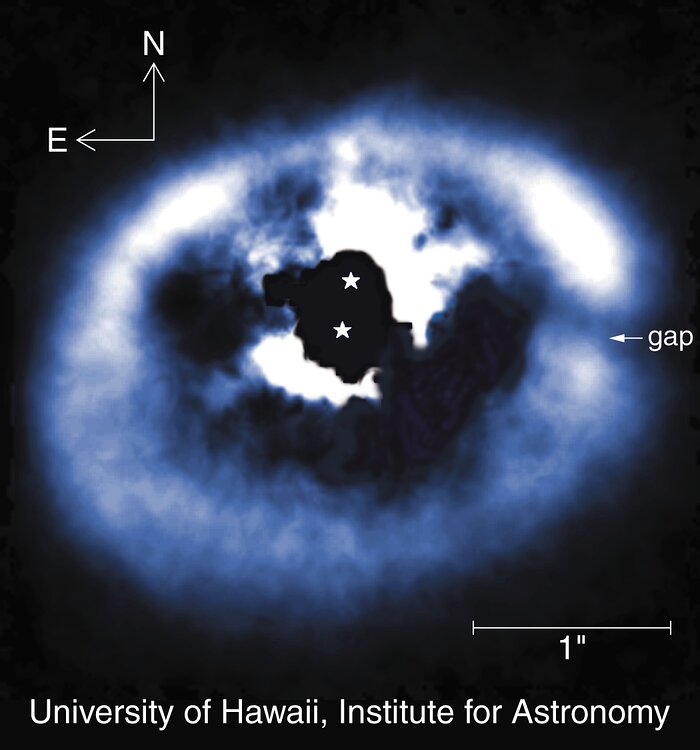 This near-infrared (H-Band) image of the disk around the binary star pair GG Tauri A-B was obtained by the University of Hawaii's adaptive optics system called Hokupa'a, mounted on the Gemini North 8-meter telescope on Mauna Kea in Hawaii on the night of February 24, 2001. Hokupa'a is the Hawaiian word for the North Star and literally means "steady star." GG Tauri is a quadruple system (and possibly a quintuple system, with the fifth component being a possible brown dwarf). Pictured here is the circumbinary disk around the primary and secondary components, which are separated by 0.24 arc seconds. GG Tauri is associated with the Tauris star-forming region, about 450 light-years from Earth. The material around the binary is known to be in Keplerian rotation around the two stars. The combined mass of the stars is approximately 1.2 solar masses, and the mass of the circumbinary ring has been measured to be about 0.3 solar masses, based on millimeter wavelength studies. This ring is optically thick in the H-Band, so what is seen is largely a reflection off the surface of the ring material. The inner 0.25 arc second surrounding the stars has been electronically masked because the bright stars saturated the detector in this region. A "gap" is shown at a position angle of 270 degrees referenced to GG Tau A, the southern binary component. This gap was noted as speculative in observations previously taken by HST/NICMOS, as it overlapped the telescope diffraction spikes. The inner boundary of the ring is not as smooth as the outer ring contours. These structures are consistent with hydrodynamic simulations that show transient flows of material onto the central stars.See also NOAO press release 01-09).