Using a giant telescope on Mauna Kea Hawaii is a dream for most amateur sky watchers. Recently a Canadian amateur astronomy group took advantage of a rare opportunity and used one of the largest telescopes in the world, the Gemini 8-meter telescope, to look more deeply into the remains of a particular stellar nursery than anyone ever has.

The observations of a star emerging from its cocoon were the result of a proposal submitted as part of a nationwide contest in Canada. The winning group from Quebec received its data/images during a special ceremony at the annual meeting of the Canadian Astronomical Society at the University of Montreal on May 15, 2005.

“Our group knew that this object was unique and hadn’t been observed in detail with a big telescope like Gemini,” said Gilbert St-Onge, the club member who submitted the proposal. “I feel like we’ve not only made a pretty picture, but probably provided some new and valuable data for the pros!”

Gemini Astronomer Tracy Beck, who studies these stellar incubators, agrees. “This object is a classic, and one of the first-known examples of this type of young star,” she said. “I believe this is by far the deepest and most detailed image ever taken of this object and scientists will no doubt use these data for important research in the future.”

The object, known as RY Tau is part of a class of objects known as T Tauri stars. These stars represent the very youngest of low-mass stellar specimens that have only recently emerged from the cocoon of gas and dust in which they formed. The new Gemini image of RY Tau displays a striking array of wispy gas filaments that glow from scattering caused by radiation from the nearby star. Over the next few million years this gas will be blown away by the central star leaving a normal star and perhaps a family of planets that also formed from gas and dust in the cloud.

The observations, which took a total of about one hour using the Gemini Multi-Object Spectrograph (GMOS), were challenging to make. The central star is so bright that it can overwhelm the faint glowing clouds around it. To overcome this, a series of many short exposures were obtained and stacked to produce the final image. A selection of four filters were also used to bring out specific color features in the dynamic cloud.

The program was sponsored by the team of scientists who coordinate Gemini observations for Canada (through the Canadian Gemini Office) at the National Research Council of Canada’s Herzberg Institute of Astrophysics (HIA) in Victoria. B.C. The contest, which began in 2004, solicited proposals from more than a hundred amateur astronomy clubs throughout Canada as a way to thank them for the work they do to support and excite the public about astronomy. The winning proposal was selected by a process similar to that used by professional astronomers, where selection criteria include scientific merit and an assessment of the uniqueness of the observation.

“When we first worked on scheduling these observations, we jokingly referred to the program as the “amateur hour” since it allows amateur astronomers to get an hour of time on a large telescope,” said Doug Welch, Canadian Gemini Project Scientist. “However, the caliber of the proposals and scientific potential of this data has shown that it is more like a pro-am golf tournament where the hobbyists work directly with the pros!”

The contest also included an hour of time on Gemini’s neighbor on Mauna Kea, the Canada-France-Hawaii Telescope (CFHT). The winning observation at CFHT was from a group in Alberta, Canada who used the wide-field capability of the telescope to image a large field of the Pleiades star cluster with the MegaPrime imager.

The winning club for the Gemini observations is called Club d’astronomie de Dorval in Quebec. The CFHT winner was the Big Sky Astronomical Society of Vulcan, Alberta. More details on the contest, which will probably be run again in the future, are available here. 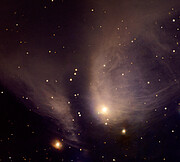