A timely discovery by American amateur astronomer Jay McNeil, followed immediately by observations at the Gemini Observatory, has provided a rare glimpse into the slow, yet violent birth of a star about 1,500 light-years away. The resulting findings reveal some of the strongest stellar winds ever detected around an embryonic Sun-like star.

McNeil's find was completely serendipitous. He was surveying the sky in January from his backyard in rural Kentucky and taking electronic images through his 3-inch (8-centimeter) telescope. When he examined his work, he noticed a small glowing smudge of light in the constellation of Orion that wasn't there before. "I knew this part of the sky very well and I couldn't believe what I was seeing," said McNeil. Astronomers were alerted almost immediately, via the Internet, and quickly realized that he had come across something special.

"It is extremely rare that we have an opportunity to study an important event like this, where a newly born star erupts and sheds light on its otherwise dark stellar nursery," said Gemini astronomer Dr. Colin Aspin. Dr. Aspin and Dr. Bo Reipurth, (of the University of Hawaii's Institute for Astronomy), published the first paper on this object, now known as McNeil's Nebula. Their work, based on observations using the Frederick C. Gillett Gemini North Telescope on Mauna Kea, is in press for Astrophysical Journal Letters.

"McNeil's Nebula is allowing us to add another important piece to the puzzle of the long, protracted birth of a star," said Reipurth. "It has been more than thirty years since anything similar has been seen, so for the first time, we have an opportunity to study such an event with modern instrumentation like that available at Gemini."

Detailed images and spectra of the stellar newborn, taken using the Gemini Near-Infrared Imager and Multi-Object Spectrograph, demonstrate that the star has brightened considerably. It is blasting gas away from itself at speeds of more than 600 kilometers per second (over 2000 times faster than a typical commercial airplane). The observations indicate the eruption was triggered by complex interactions in a rotating disk of gas and dust around the star. For reasons that are still not fully understood, the inner part of the disk begins to heat up, causing the gases to glow. At the same time, some gas funnels along magnetic field lines onto the surface of the star, creating very bright hot spots and causing the star to grow. The eruption also cleared out some of the dust and gas surrounding the young star, allowing light to escape and illuminate a cone-shaped cavity carved out by previous eruptions into the gas.

The birth of a star takes several tens of thousands of years and these observations are but a brief snapshot of the process. Although this is a very rapid schedule on astronomical time scales, Reipurth explained that it's impossibly slow compared to a human lifetime. "We astronomers therefore have no choice but to compare various objects where each one is in a different state of development," he said. "This is very similar to the imaginary situation of an alien landing on Earth with only half an hour to understand the full life cycle of humans. By looking at people of various ages and using some logic, this alien could piece together our growth from infant to old age. This is how we are beginning to understand the birth and youth of stars. Rare events like the one McNeil discovered help to fill in the blanks in our understanding of stellar origins."

This outburst may not be the first time the star has flared during its long tumultuous birth. Following McNeil's discovery, an inspection of archival plates revealed that a similar event took place in 1966, when the star flared and faded again into its enshrouding gas. "We know so little about these kinds of eruptions that we cannot even say whether the star will continue to flare or will rapidly fade from view again," said Aspin. "We were extremely fortunate that Mr. McNeil discovered this when he did. In an event like this, the earlier we can observe it, the better our chances are of understanding what is going on."

Fortunately for Aspin and Reipurth, McNeil discovered this in the early winter while the Orion region is still high in the night-time sky. It was also fortunate that McNeil was so familiar with this part of the sky that he noticed right away that something had changed. This combination of circumstances enabled the astronomers to prepare an observation run on Gemini very quickly. "Our window for observing this object is closing rapidly but it will become visible again later this year," said Aspin. "By then this eruption could be over."

A striking color image from Gemini reveals fine details in McNeil's Nebula. The star and its bright disk shine like a lighthouse through the cavity of gas and dust. The Gemini image and an artist's conception of how the escaping gas and hotspots on a young star might have caused this event can be found below. 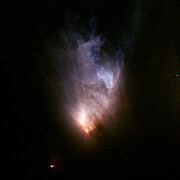 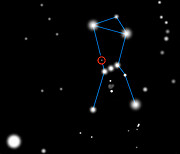 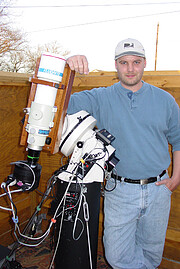 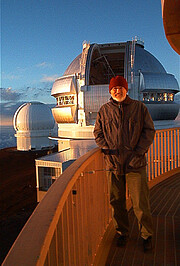