With the help of some of the largest telescopes in the world, including the Gemini telescopes, NOIRLab astronomer Siyi Xu is hunting down the remains of planets around white dwarf stars, learning from them what goes into building terrestrial exoplanets, and what might happen one day to the planets in our Solar System.

While working as an associate astronomer at NOIRLab for the Gemini North telescope in Hawai‘i, Siyi Xu is also one of the world’s leading researchers in studying what happens to the planetary systems hosted by Sun-like stars that evolve into white dwarfs.

Born in what she describes as the “beautiful town” of Kunshan in China, Xu got her PhD in astronomy at the University of California, Los Angeles and has been working at Gemini since 2017. But it’s her white dwarf work, which has recently been summarized in a paper by herself and Amy Bonsor of the University of Cambridge, UK, which has really caught people’s attention.

The closest white dwarf to the Solar System is just 8.6 light-years away, orbiting with the star Sirius. Known as ‘The Pup’, it was discovered in 1862 by the famous American telescope-maker, Alvan Clark.

In 2016 Xu and her former PhD supervisor, the late Michael Jura, led the discovery of gas around a disintegrating asteroid orbiting a white dwarf, the dense white dwarf’s gravity creating tidal forces that were ripping it apart, spilling heavy elements onto the surface of the white dwarf. Then, in 2019, Xu was at the forefront of the discovery of the first transiting exoplanet around a white dwarf, a finding that was confirmed by the Gemini Near-Infrared Spectrograph (GNIRS) on Gemini North.

Why are white dwarfs and their planetary systems — or the remains thereof — so important? 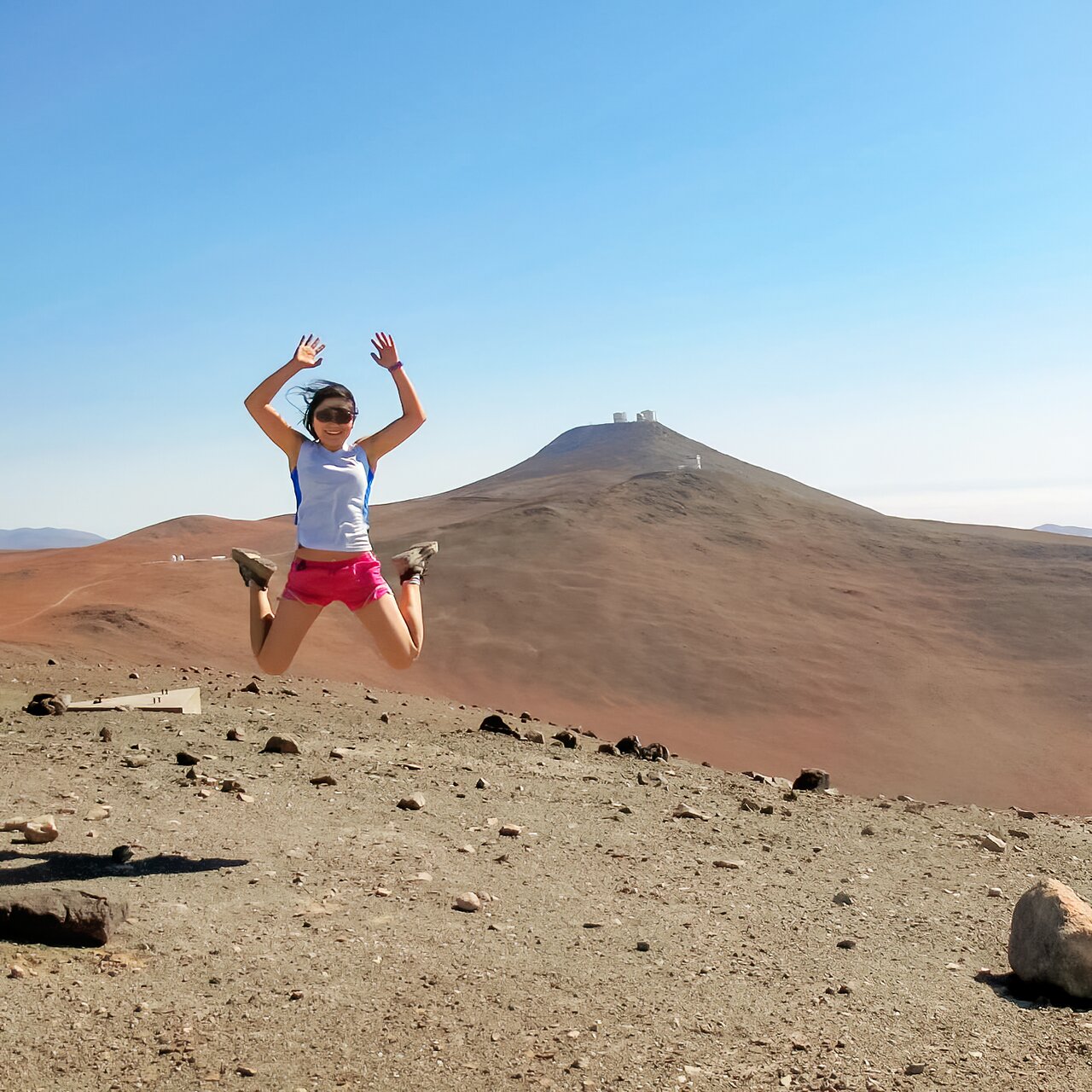 “It’s very hard to measure the composition of planets around normal stars,” Xu explains. This is because all we can see are either their cloud tops, or their atmospheres. Scientists can estimate their bulk composition — are they gaseous, solid, or partly liquid — from a planet’s density, but determining the abundance of different elements and molecules inside these planets would seemingly be impossible without opening them up.

Fortunately, white dwarfs can help us take a peek inside. All stars with masses below ten times the mass of our Sun will eventually grow old, run out of fuel for fusion reactions in their core, and puff off their outer layers to form a planetary nebula. What they leave behind is an inert, but very hot, core, which we call a white dwarf and which is about the size of a planet like Earth, yet can have a mass up to 1.4 times that of the Sun. 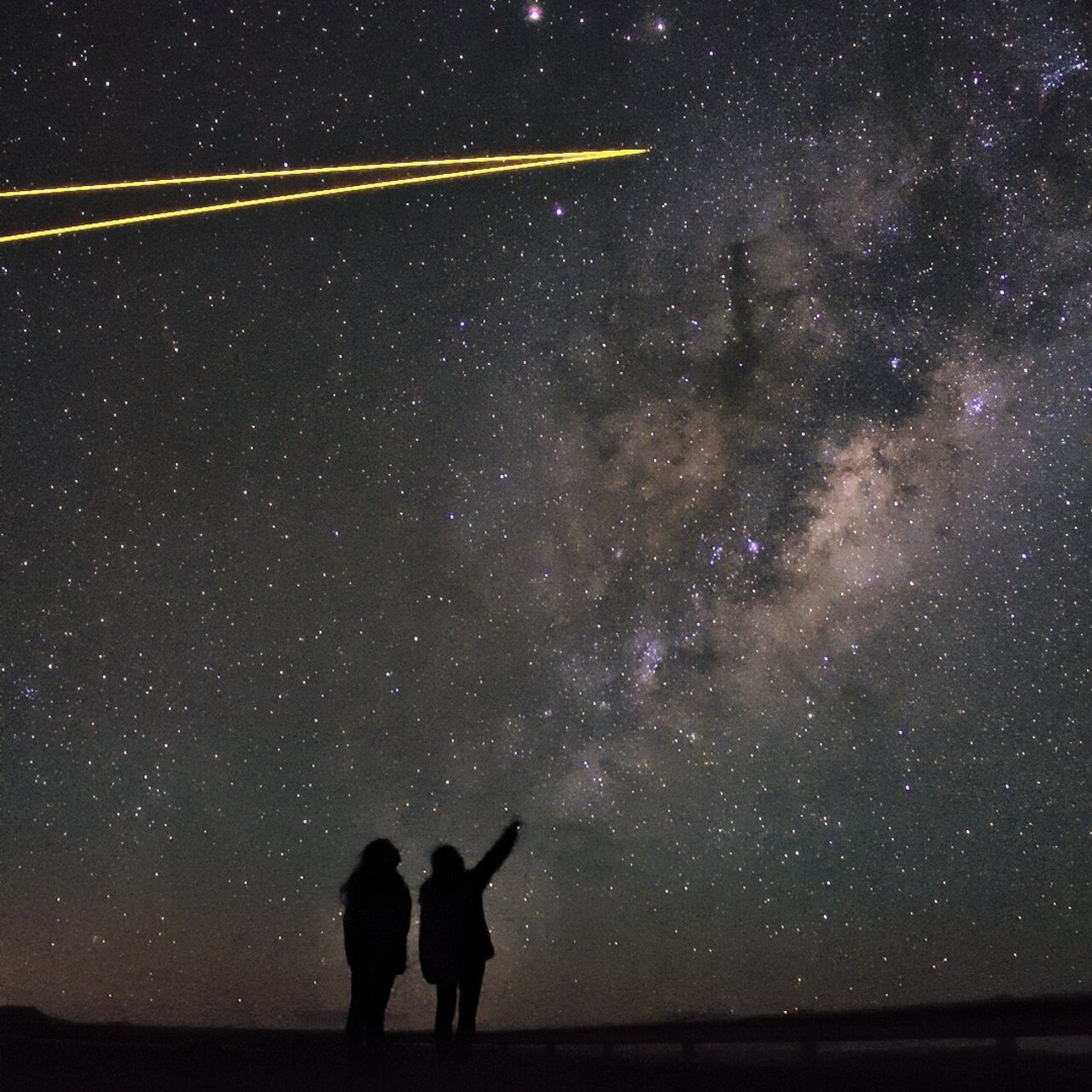 Siyi Xu and a colleague look up at the night sky as adaptive optics lasers shine upwards.
Credit: Na'ama Hallakoun

This final evolution of stars like the Sun results in the orbits of planets, asteroids and comets that have survived this evolutionary process to become disrupted, and fall towards the white dwarf, or crash into each other. If they get too close to the compact white dwarf, then tidal forces can tear them open, as in the case of the asteroid Xu studied, breaking them up so that material locked deep down inside the planet is exposed to space, and falls onto the surface of the white dwarf. By measuring the spectra of white dwarfs, which should reveal only hydrogen and helium, astronomers can detect any extra elements that have polluted the white dwarf’s surface.

“We can directly measure the chemical compositions of the planets, because they have been torn apart by the white dwarf,” says Xu. “I have been analyzing the elemental compositions of exoplanetary material around white dwarfs and they appear to be pretty similar to rocky materials in the Solar System — oxygen, iron, silicate and magnesium. We have not found any exotic element like krypton!”

This knowledge is useful because it tells astronomers that exoplanets are made of the same basic materials as the planets of our Solar System. However, while the elements are the same, the types of rock that these planets were constructed from are not.

“Recently, in collaboration with Keith Putirka of California State University, Fresno, we found that most of the rock types do not resemble rocky materials in the Solar System at all, and we had to come up with new rock classification schemes to understand these exoplanetary materials,” says Xu.

While disintegrating worlds provide us with a lot of information, the next step is to try to find more intact planets around white dwarfs and characterize their atmospheres. It turns out that planets around these "dead stars" are ideal for finding biosignatures, which could provide evidence of being potentially habitable. However, any close-in planets are unlikely to have survived the death of their star. Before the star becomes white dwarf, it expands into a red giant, vaporizing any close-orbiting worlds. This probably will be Earth’s fate too, when, in about 5 billion years’ time, the Sun begins to grow old and evolve into a red giant.

We can directly measure the chemical compositions of the planets, because they have been torn apart by the white dwarf

“The bad news is that from dynamical simulations of the Solar System, it looks like Earth is just too small and too close to the Sun, and might not make it to our star's white dwarf stage,” says Xu. However, the discovery of a surviving Earth-like planet around a white dwarf would give us hope for our planet’s survival. “We have not found any Earth-like planets around white dwarfs yet, but we will keep searching while keeping our fingers crossed!” 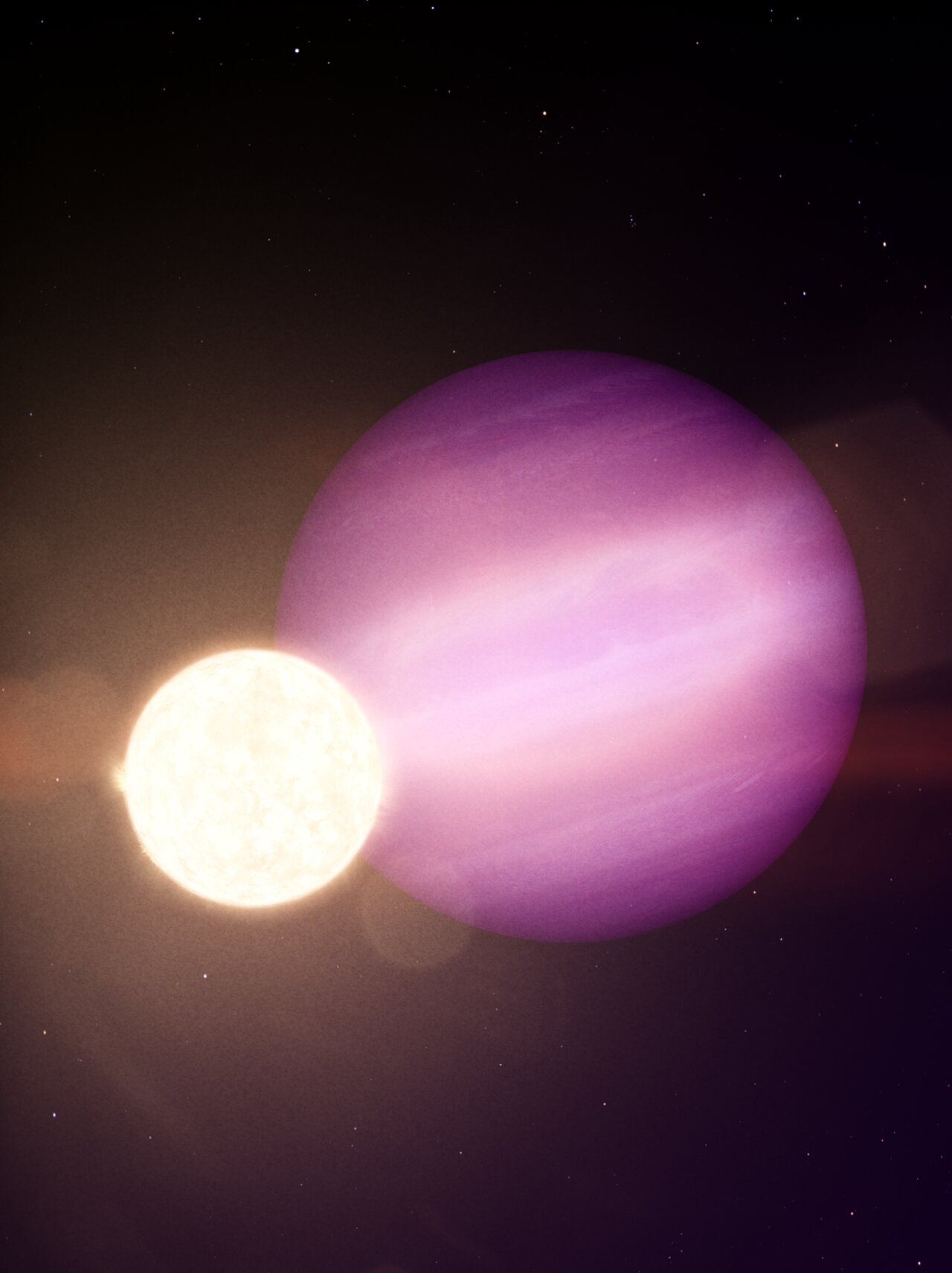 Siyi Xu has contributed to the discovery of the first known transiting planet — a gas giant — around a white dwarf.
Credit: NASA’s Goddard Space Flight Center

At Gemini North, Xu works as part of the science operations group, executing ‘queued’ observations on behalf of astronomers around the world. Queue mode is where astronomers define their observations — target, exposure time, filters, and so on — and leave it to the observatory staff, including Xu, to perform those observations for them.

We have not found any Earth-like planets around white dwarfs yet, but we will keep searching while keeping our fingers crossed!

“Gemini is mostly a queue-mode observatory,” she says. “My main functional role is to help astronomers design their observations to best achieve their science goals.” 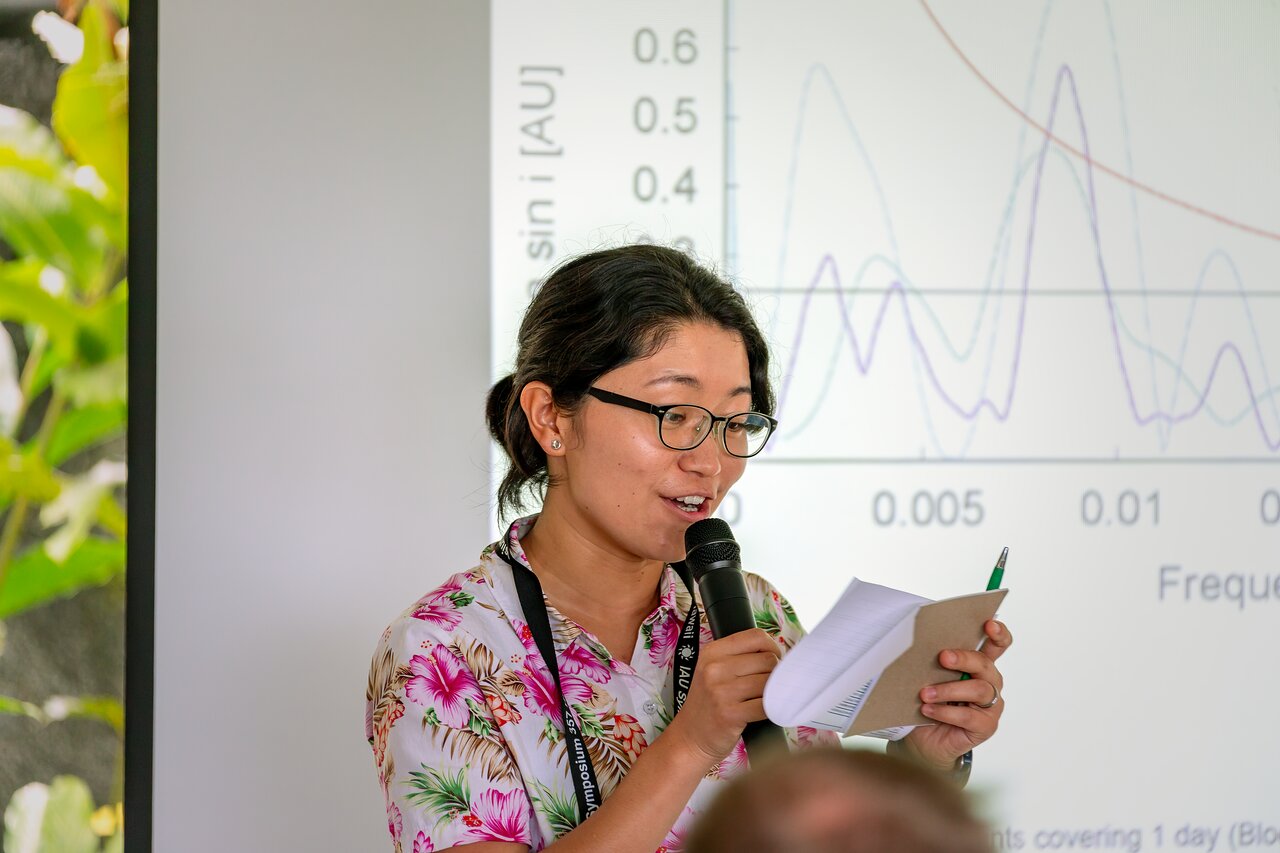 And there’s even some overlap between her job at Gemini and her research studying white dwarfs. “I think Gemini’s infrared capability [such as with the Gemini Near-Infrared Spectrograph, GNIRS) and queue-mode observation are very helpful for characterizing planetary systems around white dwarfs.”