For the first time, an intact, giant exoplanet has been discovered orbiting close to a white dwarf star. This discovery shows that it is possible for Jupiter-sized planets to survive their star’s demise and settle into close orbits around the remaining stellar ember, near the habitable zone. This foretells one possible future for our own Solar System when the Sun ages into a white dwarf.

Astronomers have used the international Gemini Observatory, a Program of NSF’s NOIRLab, and other telescopes around the globe and in space to find and characterize a giant planet, less than 13.8 times as massive as Jupiter [1], orbiting a white dwarf star [2][3]. The research is published in the journal Nature.

This is the first example of an intact giant planet orbiting close to a white dwarf star — in this case a particularly cool and dim stellar ember known as WD 1856+534. “The discovery came as something of a surprise,” according to lead author Andrew Vanderburg, assistant professor at the University of Wisconsin-Madison. “A previous example of a similar system, where an object was seen to pass in front of a white dwarf, showed only a debris field from a disintegrating asteroid.” [4]

After detecting the planet with the TESS satellite, which observed it transiting its white dwarf star, the team took advantage of the tremendous light-collecting power of Gemini North’s 8.1-meter mirror and used the sensitive Gemini Near-Infrared Spectrograph (GNIRS) to make detailed measurements of the white dwarf star in infrared light from Maunakea, Hawai‘i. The spectroscopic observations captured the unique fingerprint of the star, but not that of the planet or any debris surrounding this system [5][6]. “Because no debris from the planet was detected floating on the star’s surface or surrounding it in a disk we could infer that the planet is intact,” said Siyi Xu, an assistant astronomer at Gemini Observatory and one of the researchers behind the discovery.

“We were using the TESS satellite to search for transiting debris around white dwarfs, and to try to understand how the process of planetary destruction happens,” explains Vanderburg. “We were not necessarily expecting to find a planet that appeared to be intact.”

“Additionally, because we didn’t detect any light from the planet itself, even in the infrared, it tells us that the planet is extremely cool, among the coolest we’ve ever found.” [7]. Xu adds that the precise upper limit of the planet’s temperature was measured by NASA’s Spitzer Space Telescope to be 17 °C (63 °F), which is similar to the average temperature of Earth.

“We’ve had indirect evidence that planets exist around white dwarfs and it's amazing to finally find a planet like this,” said Xu [8]. White dwarfs are extremely dense and very small, so the exoplanet is much larger than its tiny parent star, making the system extremely unusual.

The surprising discovery of this planet, known as WD 1856b, raises interesting questions about the fate of planets orbiting stars destined to become white dwarfs (like our Sun). Of the thousands of planets outside the Solar System that astronomers have discovered, most orbit stars that will eventually evolve into red giants and then into white dwarfs. During this process, any planets in close orbits will be engulfed by the star, a fate that WD 1856b somehow managed to avoid.

“Our discovery suggests that WD 1856b must have originally orbited far away from the star, and then somehow journeyed inwards after the star became a white dwarf,” said Vanderburg. “Now that we know that planets can survive the journey without being broken up by the white dwarf's gravity, we can look for other, smaller planets.”

“The study of planets in extreme locations is giving us new perspectives on the history and fate of the billions of worlds around other stars,” said Martin Still, NSF Program Director for the international Gemini Observatory partnership. “Gemini’s sensitivity was critical in following up the TESS space-based detection of this planet, revealing a more complete story of the exoplanetary system.”

This new discovery suggests that planets can end up in or near the white dwarf's habitable zone, and potentially be hospitable to life even after their star has died. “We’re planning future work to study this planet's atmosphere with Gemini North,” concludes Xu. “The more we can learn about planets like WD 1856b, the more we can find out about the likely fate of our own Solar System in about 5 billion years when the Sun becomes a white dwarf.” [9]

[1] The upper limit of the object’s mass is 13.8 Jupiter masses. This mass is close to the dividing line astronomers use to distinguish between a planet and a brown dwarf.

[2] White dwarfs are common stellar remnants left behind by the deaths of low-mass stars like the Sun. Though they have a mass comparable to the Sun’s, they are roughly the size of Earth, making them incredibly dense. White dwarfs generate no energy of their own and glow faintly with leftover thermal energy, slowly fading over billions of years.

[3] The discovery of WD 1856b relied on observations from facilities including Gemini North, NASA’s Transiting Exoplanet Survey Satellite (TESS), NASA’s Spitzer Space Telescope, various professional telescopes around the world, and a handful of privately operated telescopes.

[5] The light from a star is spread over many wavelengths, and not all these wavelengths radiate equally. The distribution of emission at different wavelengths makes up the emission spectrum of a star, and features of this spectrum act as very recognizable “fingerprints.” When an orbiting planet gravitationally tugs at a star, it causes a star to wobble and these spectral fingerprints shift slightly. This technique is often used to gather information about exoplanets, but in the case of WD 1856, the stellar spectrum obtained by Gemini North showed no identifying features — no “fingerprints” — showing that the orbiting planet is intact.

[6] The first “polluted white dwarf” — a white dwarf with planet debris in its outer layer — was discovered in 1917 by Adriaan van Maanen using Mount Wilson observatory’s 60-inch telescope. The star is known as van Maanen’s Star and has an interesting backstory.

[7] The team was searching at a wavelength of 4.5 microns.

[8] In a result widely reported last year, a team using ESO facilities detected gas disk orbiting, and accreting onto, a white dwarf. The gas seems to have a composition similar to that of Neptune and Uranus, so it is hypothesized that the gas must have come from such a planet. The planet itself was not detected, only the gas debris.

[9] This could be the final fate of Earth and the other rocky planets in the Solar System. When the Sun expands into a red giant it will swell and become vastly more luminous, charring and then engulfing Mercury, Venus, and possibly Earth. However, there’s nothing to worry about yet — our Sun is only halfway through its 10-billion-year lifetime.

This research was presented in the paper A Giant Planet Candidate Transiting a White Dwarf to appear in the journal Nature. 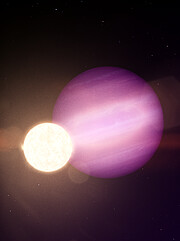 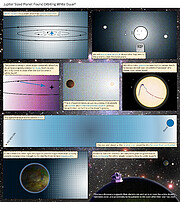