Hundreds of billions of stars, myriad nebulae, vast clouds of gas, and light-years-long filaments of dust, all wrapped up in the three components of our galaxy: its central bulge, its swirling spiral arms, and the ancient, all-encompassing halo. It’s all ripe for exploration by Vera C. Rubin Observatory, and what it finds might forever change what we know about our galactic home.

The LSST will use RR Lyrae stars as signposts for measuring distances across the galaxy. RR Lyrae stars are a type of variable star, meaning that they fluctuate in brightness, often with a distinct period of variability. They are evolved stars, meaning they were once like the Sun, but have aged to become a red giant, and then they undergo pulsations that see them ejecting some of their mass. It’s these pulsations that drive their variability. But because their absolute luminosity is linked to their period of pulsation, we can calculate how intrinsically luminous they are, and then work out how far away they are based on how bright or faint they are in the sky. Astronomers call such objects ‘standard candles’.

Though Vera C. Rubin Observatory will observe billions of distant galaxies, there is one galaxy very close to us that astronomers are desperate to learn more about: our own galaxy, the Milky Way.

You might find it surprising that we don’t know as much about our galaxy as we’d like to. But because we are inside the galaxy, in a Solar System orbiting the center of the galaxy at a distance of around 27,000 light-years, we don’t have a global view. Plus, large parts of the galaxy are hidden from us, behind the obscuring clouds of dust that inhabit the Milky Way’s spiral disk.

Astronomers want to learn more about our galaxy in order to understand its history: how did the Milky Way form, and how has it evolved since then? We know our galaxy has spiral arms, but how old are they? On smaller scales, are there structures within the spiral arms that can tell us more about the galaxy’s history? Where is most of the mass of the galaxy, both visible and dark, located? And there’s an added benefit to better understanding our galaxy — because we assume that the Milky Way is a typical spiral galaxy, astronomers should be able to apply what they learn about it from Rubin to better understand other galaxies too.

When Rubin Observatory begins science operations around the middle of this decade, its Legacy Survey of Space and Time (LSST) will be the most comprehensive survey of the Universe ever undertaken. It will sift through objects in space both near and far. What Rubin/LSST observes in the Milky Way will transform what we know about our galaxy, and has, “...the potential to spawn a revolution in our understanding of galaxy formation in general,” say LSST’s scientists in The LSST Science Book. 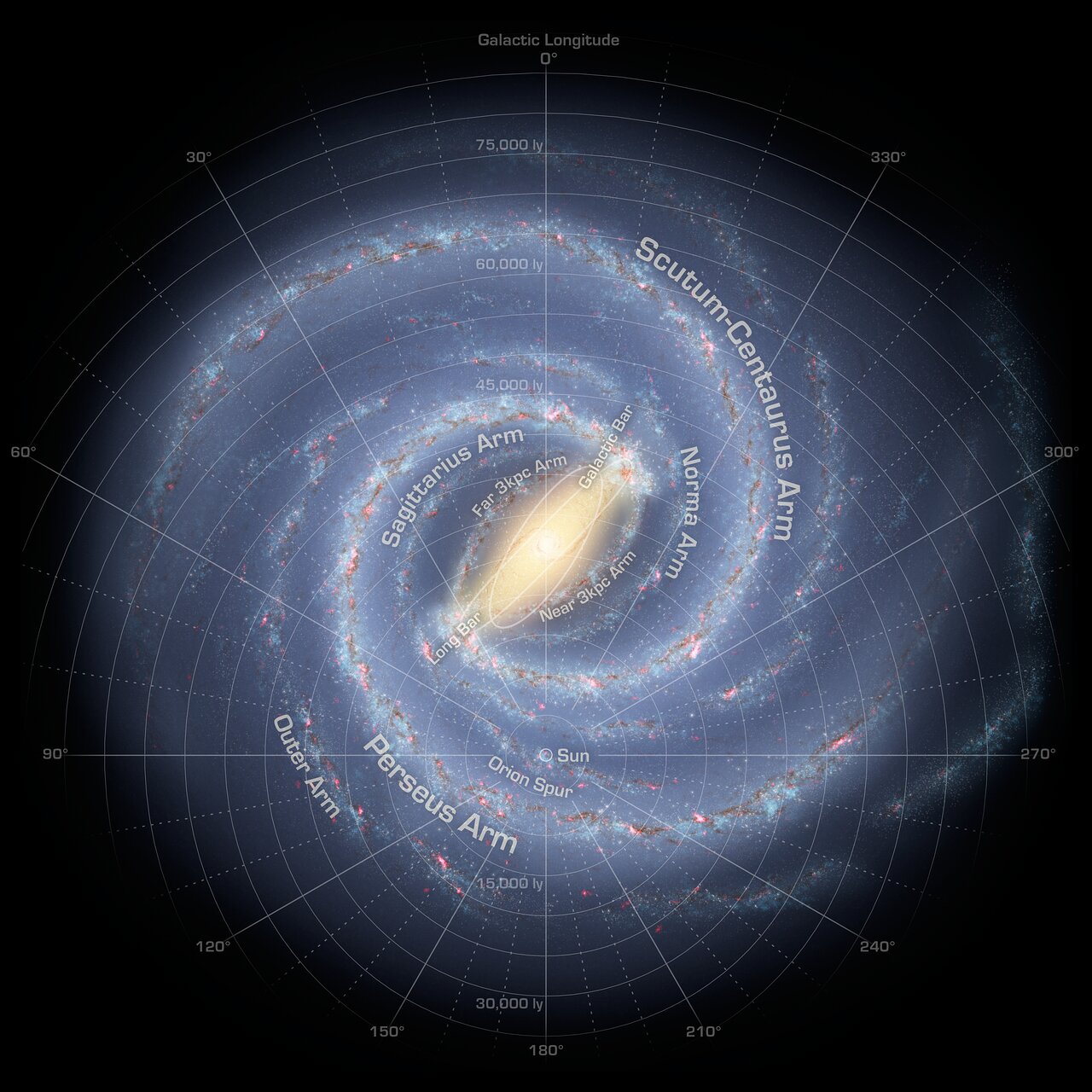 Our best map of the Milky Way so far.
Credit: NASA/JPL-Caltech/R. Hurt (SSC/Caltech).

It will do so by mapping approximately 10 billion stars in our galaxy. This is two orders of magnitude more than the number of stars mapped by the Sloan Digital Sky Survey, and spans a distance of up to 326,000 light-years, which reaches all the way out into the halo of our galaxy. And LSST won’t just map their distance. Using the six wavelength bands that the LSST camera images in — from ultraviolet to near-infrared and all through the visible spectrum — it will accurately measure the positions of the stars on the sky, their distance, their motion through the galaxy (and achieving this for stars four magnitudes fainter than what the European Space Agency’s Gaia mission can see) and their chemical composition — what astronomers refer to as ‘metallicity.’

For the first time, LSST will open a window on the dynamic history of our galaxy to give us a complete picture of when mergers happened, when different groups of stars formed, and when our galaxy obtained its distinct structure.

What all this will hopefully tell us is the history of our galaxy. Many astronomers believe that galaxies grow via collisions with other galaxies. They call this hierarchical growth, whereby smaller galaxies merge to form larger galaxies. These mergers have continued throughout the Milky Way’s history, gradually adding to the size and mass of the Milky Way. And these mergers should have left traces in the structure of the Milky Way. For example, different galaxies will have unique metallicities, and the remains of these cannibalized galaxies can be spotted as streams of stars moving with common motions. These streams also possess common metallicities that mark them out as different from the surrounding native stars of the Milky Way. 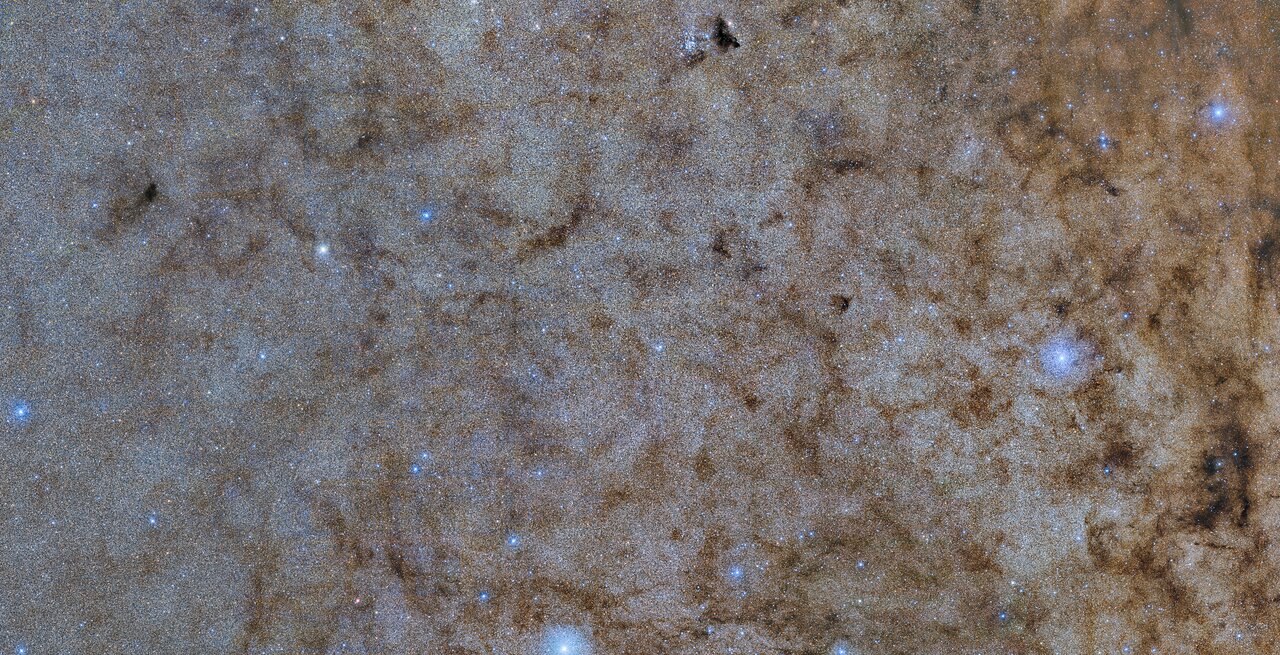 There are about 100-200 billion stars in our galaxy, and the Rubin observatory will observe 10 billion of them. This image, taken by DECam on the Víctor M. Blanco 4m telescope shows the stars towards the center of our galaxy.
Credit: CTIO/NOIRLab/DOE/NSF/AURA.

Several recent studies have attempted to identify when the Milky Way has merged with other galaxies. These studies have come up with a tentative timeline of mergers, but this timeline is vague because there are gaps and uncertainties in the amount of data that we have on the stars of the Milky Way. LSST will fill these gaps and help firm up the timeline.

In doing so, it may also solve a mystery of galaxy formation. The Milky Way’s spiral disk is split into two parts. First there’s the thick disk, which is a deep disk of older stars that climbs about a 1000 light-years above and below the plane of the galaxy. Then there’s the thin disk, which rises just 400 light-years above the plane of the galaxy. It’s in the thin disk where all the galaxy’s star formation is taking place, and where the Solar System is located. It’s also younger than the thick disk, and is estimated to be around 6 to 8 billion years old. However, astronomers do not understand how or why, if the galaxy has been merging with smaller galaxies throughout its history, the thin disk has not been disrupted. Astronomers hope that the data that LSST collects will provide some clues as to why the mergers haven’t broken up the thin disk, which in turn will offer clues as to the conditions that have led to the younger stars in the galaxy, including our own Sun. Ultimately this work will allow astronomers to trace the evolution of variious populations of stars in the galaxy, in the spiral disk, in the central bulge, and in the halo. 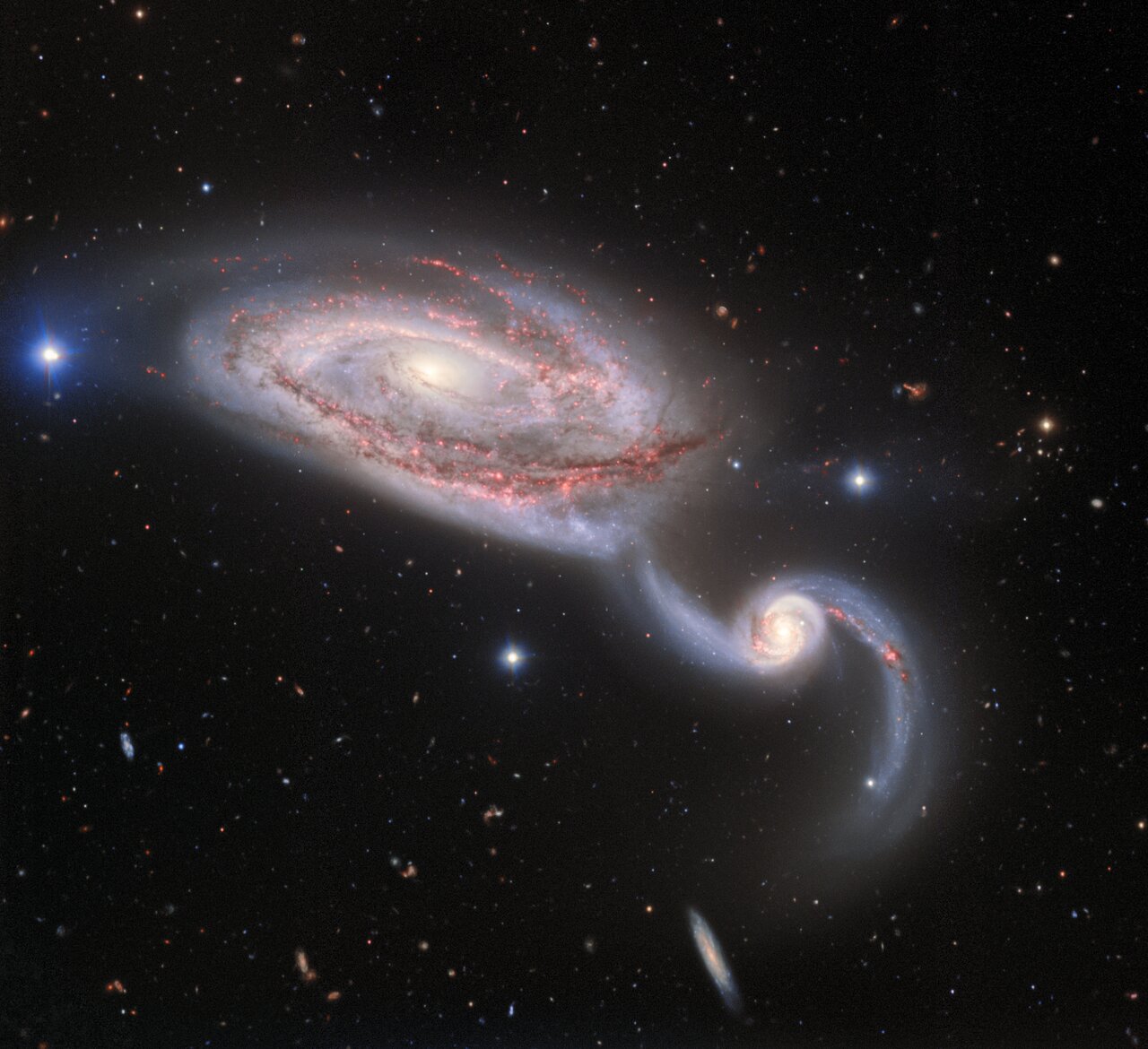 Galaxies grow by colliding and merging with other galaxies. What is the Milky Way’s history of mergers?
Credit: International Gemini Observatory/NOIRLab/NSF/AURA.

What makes all this possible are the unique combination of abilities that Rubin possesses. These include the six wavebands that it will image in, including the so-called ‘u-band,’ which refers to ultraviolet light centered at a wavelength of 375nm and will enable astronomers to measure the metallicities of hotter, brighter stars, particularly those Sun-like stars nearing the ends of their lives. It will also observe in the near-infrared ‘y-band’ centered at 1020nm, which will allow Rubin to observe stars whose light has been reddened by the intervening dust in the galaxy. Ultraviolet and infrared are two parts of the electromagnetic spectrum that are not always so easy to observe from the surface of the Earth, since they are absorbed, mostly by ozone and water vapor in the atmosphere. Rubin’s high altitude of 2,662 meters atop Cerro Pachón near Chile’s dry Atacama Desert certainly helps it observe these wavelengths.

When Rubin Observatory begins science operations around the middle of this decade, its Legacy Survey of Space and Time (LSST) will be the most comprehensive survey of the Universe ever undertaken.

For the first time, LSST will open a window on the dynamic history of our galaxy. The results should give us a complete picture of when mergers happened, when different groups of stars formed, and when our galaxy obtained its distinct structure. It might even tell us where and how the Sun formed, and identify some of its siblings that formed alongside our galaxy. In a way, it’s all about getting to know our celestial family a little better, before waiting to get to know the neighbors. 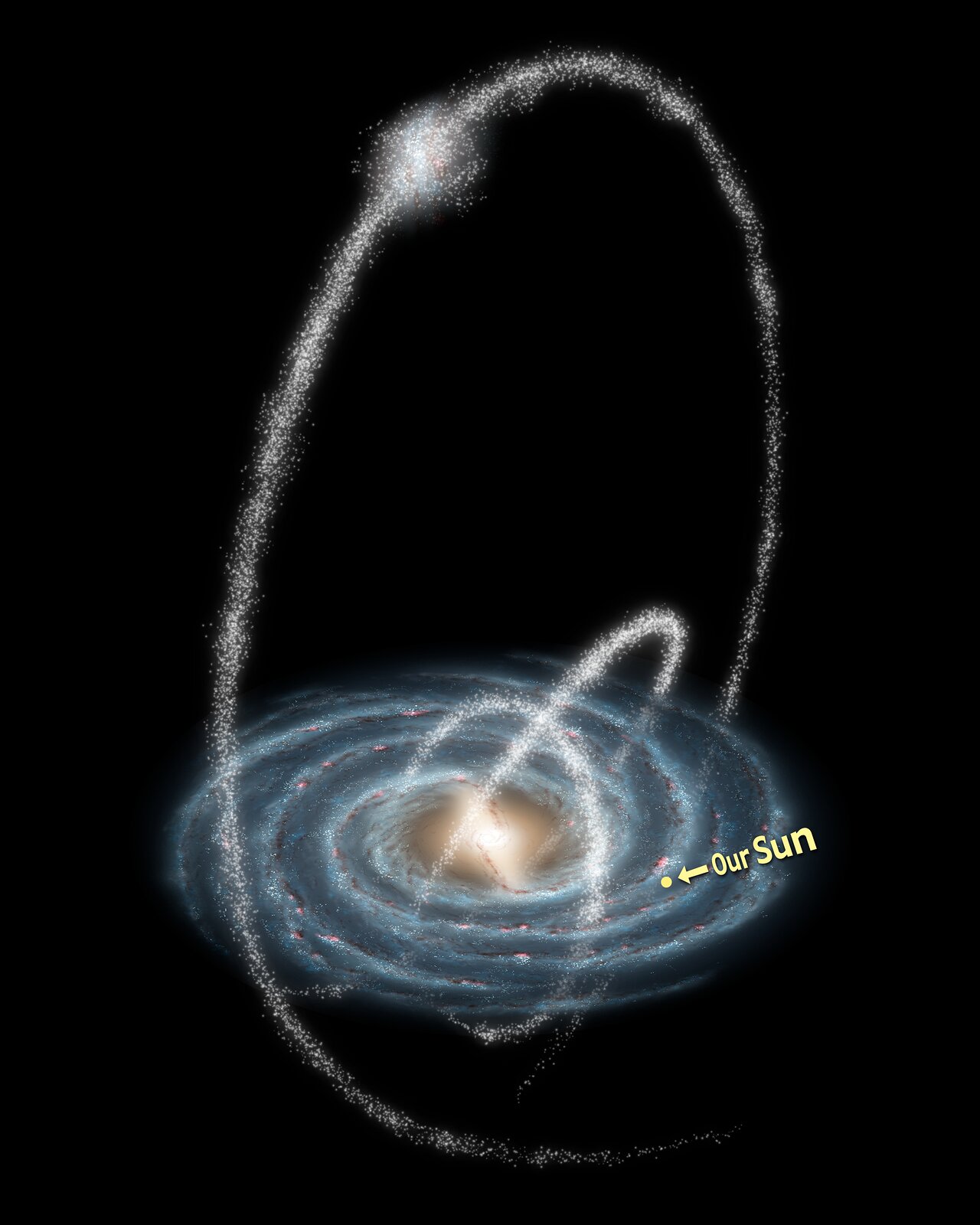 When our galaxy cannibalizes other galaxies, our galaxy’s gravity pulls stars out of the other galaxies, forming streams of stars wrapped around and throughout the Milky Way.
Credit: NASA/JPL-Caltech/R. Hurt (SSC/Caltech).