By mapping the objects that it sees in the Universe, Vera C. Rubin Observatory will also be able to map what it cannot see — mysterious dark matter that holds galaxies and galaxy clusters together with its gravity and which makes up the majority of the matter in the Universe.

It’s fitting that Vera C. Rubin Observatory will be leading the hunt for dark matter in the Universe, because the observatory is named after the woman astronomer who, in the late 1960s and 1970s, discovered evidence for dark matter. Rubin, along with her colleague Kent Ford, found that stars on the periphery of galaxies were orbiting just as fast as the stars closer to the center of those galaxies. The only explanation was that there was more gravity associated with those galaxies than could be accounted for by all their visible matter. Consequently, astronomers began to think that there must be a great deal of unseen matter responsible for this gravity — far more matter than was visible. They called this unknown quantity dark matter.

There are two ways to study dark matter, and Vera C. Rubin Observatory is going to set the standard for one of those ways when it comes online in the middle of the decade.

Dark matter is the mysterious component that holds together structure in the Universe today. It’s the scaffolding inside which galaxies and galaxy clusters form. Nobody knows what dark matter is, but we know that it is everywhere, and makes up 85% of all the matter in the Universe. The remaining 15% is accounted for by everything else — galaxies, nebulae, stars, planets, us. So, there’s a lot of the Universe that remains hidden.

One of the ways that dark matter’s gravitational effect manifests itself is through gravitational lensing. Individual galaxies, as well as huge galaxy clusters, are ensconced in a halo of dark matter. The gravity of these dark matter haloes warps space, creating a lensing effect that causes light from background galaxies to become magnified, distorted, and even split into multiple images.

The expectation is that Rubin will find thousands of gravitational lenses, both weak and strong, of all sizes and shapes, and chart filaments of dark matter hundreds of millions of light-years long.

The so-called strong gravitational lenses — those that steal the headlines, with dramatic multiple images or Einstein rings — are comparatively rare, relying on precise alignments between the background galaxy, the lens, and ourselves. More common, but harder to find, are weak lensing phenomena. Since dark matter fills the Universe, but not always as densely as the haloes around galaxy clusters, most lines of sight in the Universe pass through some dark matter, which results in the weak lensing effect across wide areas of the sky, where large numbers of galaxies share the same subtle distortions. On its own, any single galaxy is unlikely to show much distortion as a result of lensing, but the statistics of many galaxies helps to build up a picture of where the dark matter is distributed throughout the Universe.

To get enough galaxy data for the statistics on weak lensing to be sound requires covering much of the sky, which is where Rubin comes in. The 9.6 square-degree field of view of its 8-meter Simonyi Survey Telescope is critical for observing enough galaxies to not only gain accurate information, but to map dark matter over the entire sky visible to Rubin from its southern perch on Cerro Pachón in Chile. The expectation is that Rubin will find thousands of gravitational lenses, both weak and strong, of all sizes and shapes, and will chart filaments of dark matter hundreds of millions of light-years long, forming threads in the cosmic web of matter. And because the deeper we look in the Universe the farther back in time we are seeing, Rubin will also be able to chart how the distribution of dark matter has changed over the history of the Universe. 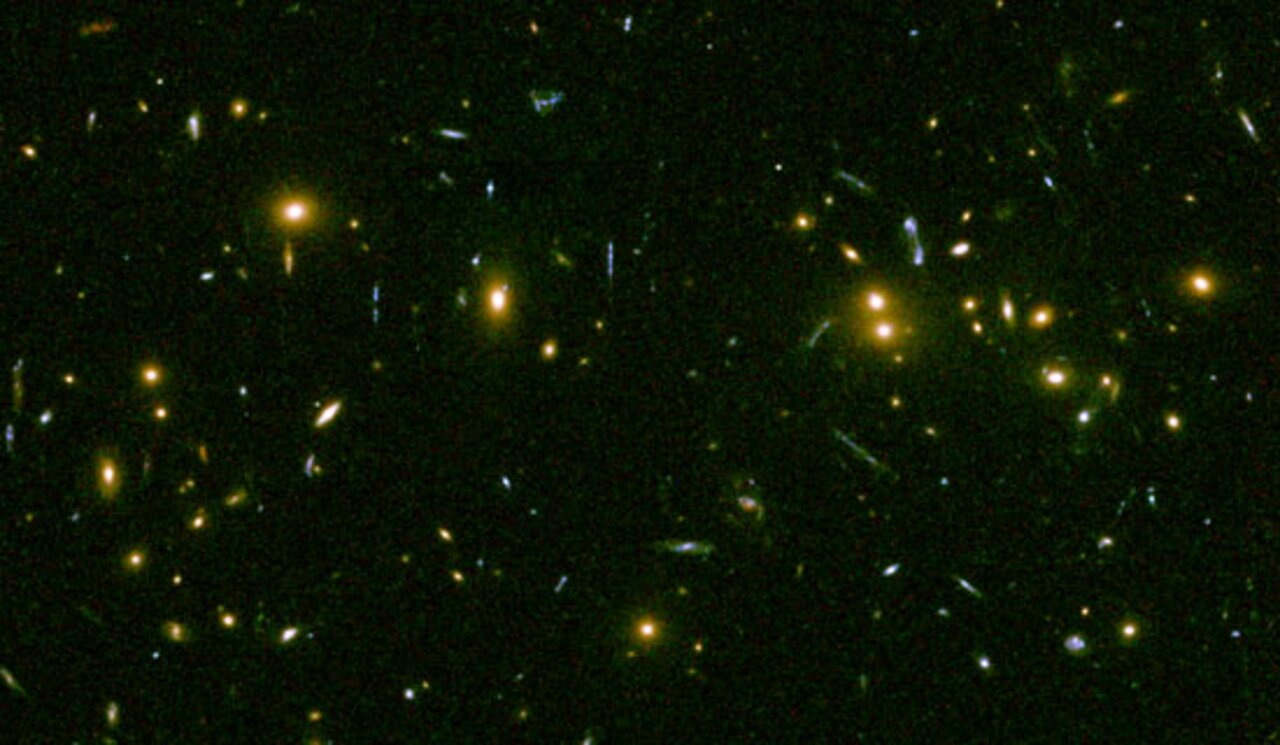 The center of the galaxy cluster RXJ0152.7-1357 shows many yellow-orange galaxies that are members of the cluster. The numerous blue streaks are distant blue galaxies that are being gravitationally lensed by the mass of the cluster, which includes a significant amount of dark matter, seen here in false color.
Credit: International Gemini Observatory/NOIRLab/NSF/AURA.

Rubin’s observing targets are the many tens of billions of faint blue background galaxies in the Universe, which are being weakly lensed by foreground galaxy clusters and clumps of dark matter. These extremely faint background galaxies are so ubiquitous that on average there is one distant blue galaxy for every few arcseconds of sky.

Only Rubin has the sensitivity, the light-gathering power and field of view to accomplish this task over such a wide area of sky.

Rubin will image these galaxies across a range of wavelengths, enabling astronomers to calculate the photometric redshifts of the galaxies. In other words, based on the amount of reddening of the colors of the galaxies, astronomers will estimate their redshifts, and therefore the era of cosmic history and distance from us, at which each galaxy resides. Once astronomers know the redshifts, they’ll cut the Universe into ‘slices’ equating to different eras in cosmic history to create a 3D map of dark matter going back around seven billion years in time, around half way to the Big Bang. 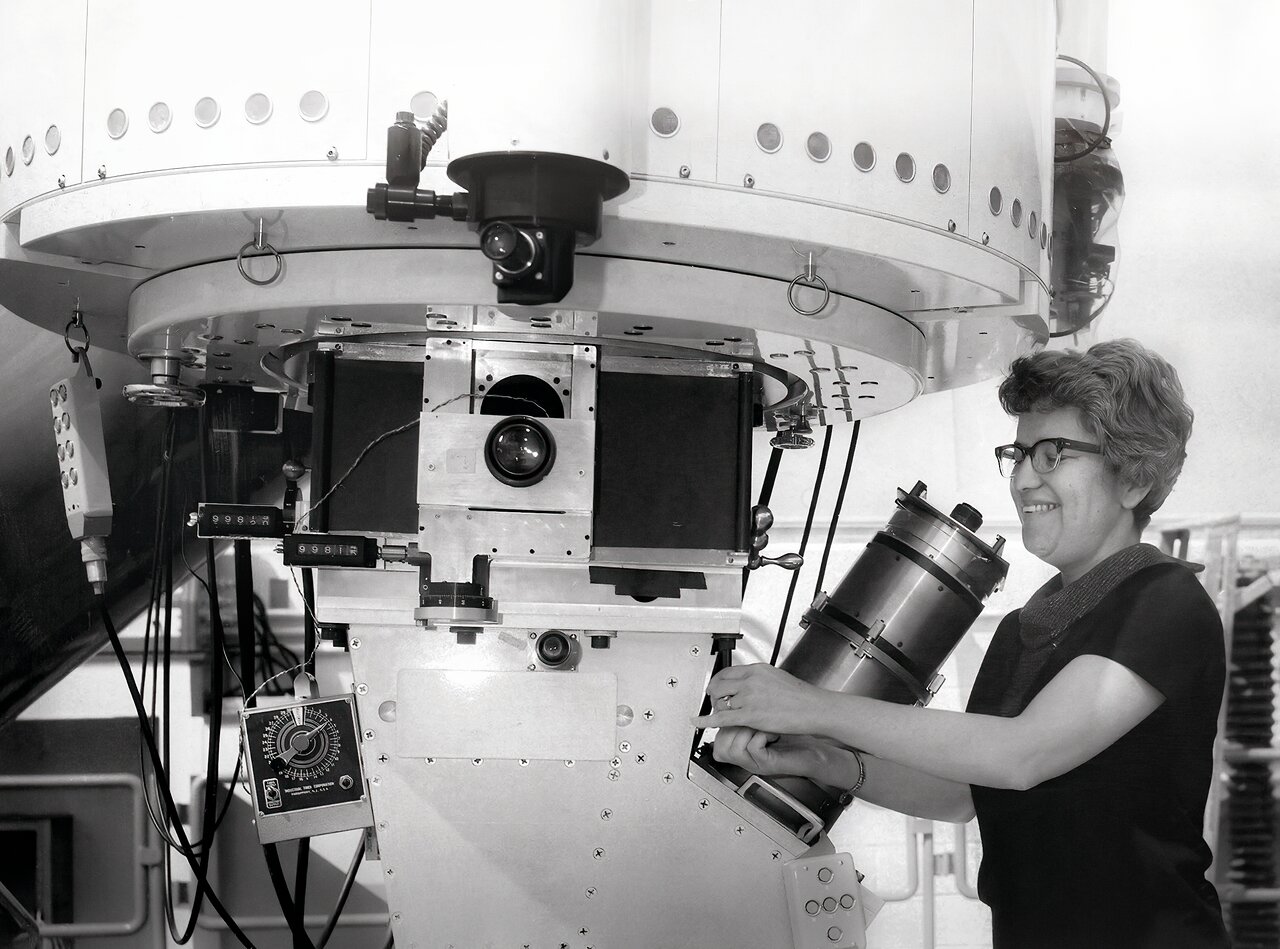 Vera Rubin, for whom the Rubin Observatory is named, made the measurements that confirmed the existence of dark matter around galaxies in the 1960s–70s. She is photographed here at Kitt Peak in 1963.
Credit: NOIRLab.

Only Rubin has the sensitivity, the light-gathering power and field of view to accomplish this task over such a wide area of sky.

Once its mission has been accomplished, astronomers will be armed with the most comprehensive map of dark matter ever produced. It will show where dark matter exists in space and time, and this can be correlated with the locations of where galaxies are forming, or where galaxy clusters are growing. That will enable astronomers to better understand the relationship between dark matter and the growth of structure in the Universe, and to test predictions about the amount of dark matter expected to exist in the Universe. It will provide much stronger constraints as to what dark matter could actually be, and how it interacts with matter and gravity on the largest scales. In short, even if Rubin may not be able to tell us exactly what dark matter is, it will tell us what dark matter can do.