A Multiwavelength View of Celestial Fireworks

Around May 1, 1006 A.D., observers from Africa to Europe to the Far East witnessed and recorded the arrival of light from what is now called SN 1006, a tremendous supernova explosion caused by the final death throes of a white dwarf star. This image of SN1006 is a composite of optical, radio, and X-ray data of the full shell of the supernova remnant. The optical data was obtained at the University of Michigan’s 0.9-meter Curtis Schmidt telescope at Cerro Tololo Inter-American Observatory in Chile. H-alpha, continuum-subtracted data were provided by FrankWinkler (Middlebury College) et al. The object has an angular size of roughly 30 arcminutes (about the size of the full Moon), and a physical size of 60 light-years, based on its distance of nearly 7,000 light-years. 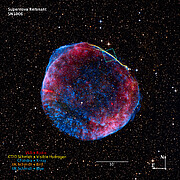