Mysterious Disk of Blue Stars Around Black Hole in M31

A team of astronomers including NOAO scientists have used the Hubble Space Telescope to identify the source of a mysterious blue light surrounding a supermassive black hole in our neighboring Andromeda Galaxy (M31). The strange light has puzzled astronomers for more than a decade.

Infrared image of the Andromeda Galaxy taken with the Mayall 4-meter telescope at KPNO. 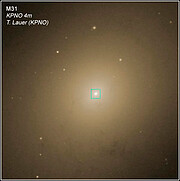