This stunning image from the Gemini Observatory’s Multi-Object Spectrograph captures the graceful interactions of a galactic ballet, on a stage some 300 million light-years away. The galaxies are literally tearing each other apart, as the shapes of four of them are warped by mutual gravitational interactions. The fifth galaxy, at the top center of the image (NGC 7320) is thought to be much closer to us than the others, so it remains unaffected by the dance of galaxies behind it. It is further distinguished in this image by numerous red blobs indicating hydrogen-rich star forming regions. 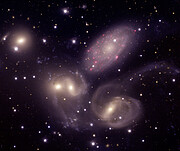