The first exoplanet discovered using the Gemini Planet Imager (GPI) is a young, cool object between 2–10 Jupiter masses. Identified as 51 Eridani b, new research indicates that its color is redder than similar brown dwarfs and might be due to clouds in its atmosphere. The research also hints that the formation of this exoplanet is likely due to the collapse of icy disk materials followed by the accretion of a thick gas atmosphere – much like the process astronomers think probably formed the gas giants in our Solar System.

An international team of astronomers led by Abhijith Rajan (School of Earth and Space Exploration, Arizona State University) observed the exoplanet 51 Eri b using GPI spectroscopy and determined that the planet is redder than similar brown dwarfs seen elsewhere. "This might be due to presence of clouds, similar to young L-type planetary mass companions," said Rajan. "A possible reason for the presence of clouds, is that the planet is still in transitioning from a partially- to patchy-cloudy atmosphere, with lower mean surface temperatures."

The GPI observations, part of the Gemini Planet Imager Exoplanet Survey (GPIES) was combined with mid-infrared photometry at the W.M. Keck Observatory. These data allowed the team to conclude 51 Eri b appears to be one of the only directly imaged planet that is consistent with cold-start scenario. In this scenario 51 Eri b would have formed by core accretion in which a core is formed very early from planetesimal agglomerations while there is enough gas around it to form a gas giant planet. The result is a low temperature and low luminosity planet. This mechanism is also a widely-held hypothesis explaining the formation of the gas giants in our Solar System.

Located about 100 light years from Earth, 51 Eri b is between 2–10 times the mass of Jupiter and orbits the star 51 Eridani A. The host star, 51 Eridani A, has a visual magnitude of 5.2 and visible to the naked eye under ideal conditions and easily visible in a pair of binoculars from most of the Earth’s surface!

We present spectro-photometry spanning 1–5 µm of 51 Eridani b, a 2–10 MJup planet discovered by the Gemini Planet Imager Exoplanet Survey. In this study, we present new K1 (1.90–2.19 µm) and K2 (2.10–2.40 µm) spectra taken with the Gemini Planet Imager as well as an updated LP (3.76 µm) and new MS (4.67 µm) photometry from the NIRC2 Narrow camera. The new data were combined with J (1.13–1.35 µm) and H (1.50–1.80 µm) spectra from the discovery epoch with the goal of better characterizing the planet properties. 51 Eri b photometry is redder than field brown dwarfs as well as known young T-dwarfs with similar spectral type (between T4–T8) and we propose that 51 Eri b might be in the process of undergoing the transition from L-type to T-type. We used two complementary atmosphere model grids including either deep iron/silicate clouds or sulfide/salt clouds in the photosphere, spanning a range of cloud properties, including fully cloudy, cloud free and patchy/intermediate opacity clouds. Model fits suggest that 51 Eri b has an effective temperature ranging between 605–737 K, a solar metallicity, a surface gravity of log(g) = 3.5–4.0 dex, and the atmosphere requires a patchy cloud atmosphere to model the SED. From the model atmospheres, we infer a luminosity for the planet of -5.83 to -5.93 (log L/L⊙), leaving 51 Eri b in the unique position as being one of the only directly imaged planet consistent with having formed via cold-start scenario. Comparisons of the planet SED against warm-start models indicates that the planet luminosity is best reproduced by a planet formed via core accretion with a core mass between 15 and 127 M⊕. 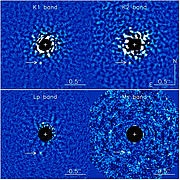