The first refereed science paper based on data from the Gemini Multi-conjugate adaptive optics System (GeMS) demonstrates the effective use of young, lower mass stars to determine the age of a star cluster. The work, led by Canada’s Tim Davidge, also brings into focus how young cluster stars “leave the nest” and enter the general population of stars in our galaxy.

Recent observations using the powerful new GeMS adaptive optics system at Gemini South catch stars before they settle into their “regular lives” and reveal clues into the past and future of a low-mass star cluster – in this case, Haffner 16 - in our Milky Way Galaxy. The combination of Gemini’s large 8-meter aperture, its infrared sensitivity, and the latest in adaptive optics (which corrects for the blurring effects of the Earth’s atmosphere), provide the key elements for the success of this work. The so-called “pre-main sequence” stars tend to be fainter, in part because they are less massive than their counterparts that advance onto the main sequence (where most stars spend the majority of their lives) more rapidly. Within a low-mass cluster like Haffner 16 very massive stars may not exist at all, preventing the use of standard age-dating techniques that rely on studying higher-mass stars.

According to lead author Tim Davidge (Dominion Astrophysical Observatory, Canada), “Studies of low mass clusters like Haffner 16 provide insights into how typical stars transition from star-forming factories to the street.” We have caught this star cluster in the act of dissolving says Davidge. These direct observations are an important clue in understanding the local neighborhood of the Sun, where isolated pre-main sequence stars are observed, without any obvious sign of the typical clusters, where it is believed most stars are born. Such isolated pre-main sequence stars could have come from clusters like Haffner 16 but have since disintegrated. Davidge has already obtained additional observations using GeMS. Utilizing the same techniques, he is able to identify the pre-main-sequence stars in three other, more distant clusters, which he classifies as older.

The GeMS system uses multiple laser guide stars (5) and several deformable mirrors to make exceptionally uniform corrections over an extremely large adaptive optics field-of-view which counteracts for distortions due to Earth’s turbulent atmosphere. The work engaged an international team, including several team-members involved in the development and operation of GeMS. The paper will appear soon in Publications of the Astronomical Society of the Pacific. 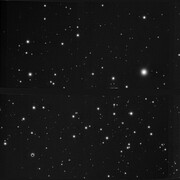