Consequences of galaxy-scale outflows are profound in the early universe, and an international team led by David Alexander at Durham University (UK) provides insight into the process using new observations with the Gemini Near-Infrared Integral Field Spectrometer (NIFS) on Gemini North.

The material between galaxies is observed to be enriched in metals (elements more complex than helium) compared with primordial abundances, which requires early generations of star formation to produce the metals. The galactic outflows thought to be responsible for this enrichment must be extremely energetic for the material to escape a galaxy’s strong gravitational pull.

Moreover, outflows and superwinds may provide some of the feedback that suppresses further star formation, thus accounting for the sharp decline in the cosmic star-formation rate from its peak at redshifts between z ≈ 2 to 3. Either the stars themselves (through winds and supernovae) or winds and jets that are a result of accretion onto supermassive black holes in active galactic nuclei (AGN) could provide the energy necessary to drive the outflows.

This recent work presents observations of a z = 2.07 quasar (SMM J1237+6203) that also emits strongly at submillimeter and infrared wavelengths. While the active nucleus is powerful (having an X-ray luminosity of about 1044 erg per second), the large submillimeter, radio, and infrared luminosities indicate that a luminous starburst is also present. The NIFS integral field unit data show spectrally broad [O III] emission that is correlated with the largest velocity offsets, which is characteristic of a galaxy-wide outflow. While the origin of the suggested outflow cannot be identified as either an AGN or starburst for certain, they persist over timescales appropriate for either process. The team concludes that the total energy of the outflow would be comparable to the binding energy of the galaxy spheroid, which, according Alexander, "...is literally at the point of blowing the galaxy apart."

Extended high-velocity emission has been observed in distant radio galaxies, but these galaxies are rare and therefore cannot provide a general explanation for the apparent feedback that occurs as galaxies evolve. The team has additional NIFS observations of other high-redshift, submillimeter-bright galaxies in hand, which they will use to provide a more systematic account of the radio quiet population. The current work will appear in Monthly Notices of the Royal Astronomical Society: “Revealing an Energetic Galaxy-Wide Outﬂow in a z ≈ 2 Ultraluminous Infrared Galaxy”, by David M. Alexander, A. Mark Swinbank (Durham University, UK), Ian Smail (Durham University, UK), Richard McDermid (Gemini Observatory), and Nicole P. H. Nesvadba (Université Paris). 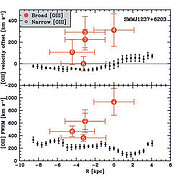