Using the Gemini Near-Infrared Spectrograph (GNIRS), astronomers have obtained an ultra-deep (~29 hour integration) near-infrared spectrum of a massive compact quiescent galaxy at a redshift of about 2.2 (when the universe was only about three billion years old). Understanding how a massive galaxy–especially this early in the history of the universe–can squelch star birth with such efficiency is a challenging problem for both observational and theoretical astrophysicists.

The team, led by Mariska Kriek of Princeton University, used GNIRS on Gemini South to dissect the light of the galaxy, identified as 1255-0, in what is the deepest single-slit near infrared spectrum ever taken of a galaxy with a redshift greater than 2 (Figure 1). The spectrum, for the first time, shows absorption line features in this type of galaxy that allow for accurate redshift determination (Figure 2) and is providing insights into this unique category of galaxies that are very massive yet display extremely efficient squelching of star formation at this epoch. See Kriek et al.’s earlier work on this subject (also using GNIRS) here.

A general dearth of spectroscopic data on galaxies of this type and redshift (age) make it very difficult to piece together an evolutionary scenario that explains how these galaxies can so quickly go from what must have been a remarkably frenzied period of star birth in the early universe to the quiescence phase that we see at redshifts of around 2. The Gemini GNIRS data, thanks to the detection of stellar continuum emission and of faint emission lines (ratios obtained for [NII]/H(alpha), [SII/H(alpha) and [OII]/[OIII]), allow analysis of star formation which is estimated to be less than 1% of the galaxy’s past average star formation rate. The emission-line ratios are also typical of Low-Ionization Nuclear Emission-line Region (LINER) galaxies. Best fit models to the spectrum imply an age of formation corresponding to a redshift range of z = 4 to 7.

This research was conducted on the Gemini Near-Infrared Spectrograph (GNIRS) which is currently undergoing re-commissioning after an accidental overheating of the instrument during maintenance in 2007. GNIRS will be re-deployed on the Gemini North Telescope. It is expected that GNIRS will be available for the Gemini community again in early 2010. See the GNIRS status page here. 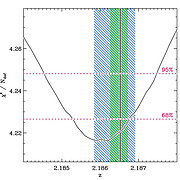