The Early Life of a Galaxy

New results from Gemini observations show the early life of a distant galaxy, building its first generation of stars. An international team led by Mark Swinbank at the Institute for Computational Cosmology at Durham University in the UK and Tracy Webb at McGill University, Canada used the Near-Infrared Integral Field Spectrometer (NIFS) on the Gemini North telescope to make the measurements. See the Durham University press release on this result here.

The galaxy's redshift is z=4.92, so the light comes directly from the time when the universe was just over 1 billion years old. While such distant galaxies are normally extremely faint, this one is fortuitously located behind a massive cluster of galaxies, whose gravity acts as a lens to enhance the view. The team finds that the distant galaxy's apparent brightness is increased 12.5 times, and the lensing magnification assists in probing fine spatial detail which would otherwise be impossible without the increased light grasp of the next generation of 30-meter class telescopes.

The NIFS data show a total star formation rate of at least 42 Msun/year, which would be sufficient after 15 million years to account for the observed mass of stars currently detected in Hubble Space Telescope (HST) and Spitzer Space Telescope observations, M* = 7 x 108 Msun. However, most of the total mass of the galaxy is not in stars so the galaxy probably has a reservoir of material to continue forming new stars.

Other measurements indicate that the galaxy's stars are relatively young. Together, these findings suggest that we are seeing this galaxy's first episode of star formation. This example offers a unique insight into how the oldest stars in the Milky Way Galaxy may have formed.

The new star formation is concentrated in several distinct areas, not the galaxy's nucleus. These stellar nurseries exhibit star formation rates which are unusually high for their size compared to star-forming regions in the Milky Way Galaxy or typical areas of other nearby galaxies-although they are similar to the extreme cases of starburst galaxies. With new HST surveys of galaxy clusters, the team expects to find more galaxies near z=5 to follow up with Gemini and investigate the early lives of galaxies in detail. 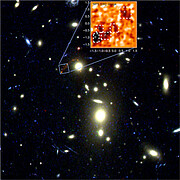