“I thought they were pulling my leg,” said Australian high school student Daniel Tran when he first found out that his entry into the Australian Gemini Partner Office imaging contest was selected as the winner.

His target, known as the Glowing Eye Nebula (NGC6751), entered the Gemini South queue for 2009A where it received one hour of telescope time for multi-band imaging with the Gemini Multi-object Spectrograph. The image is shown here as a color composite produced by Travis Rector from Daniel’s data.

The contest, sponsored by the Australian Gemini Office solicited high school students from across Australia to submit a target and explain why it would be make a good image. According to Daniel, when he saw the object online at the WorldWide Telescope (WWT, a project of Microsoft) he found that, “its unique colour and structure made me want to know more about it, and the name itself caught my attention and started to reel me in.”

The image was revealed at an event on September 23th (Australian time) hosted by Dr. Christopher Onken of Mount Stromlo Observatory and Dr. David Frew of Macquarie University who explained to the students the context of the image and how this planetary nebula glows due to its central star at the end of its life.

The image will appear on the cover of the January 2010 issue of the Australian Sky and Telescope magazine and will be featured in the December 2009 issue of GeminiFocus, the newsletter of Gemini Observatory (available online in mid-November).

Australia receives about 6% of Gemini’s observing time and is administered by the Australian Gemini Office (AusGO) who also announced that the second iteration of this program is now being planned for 2010. 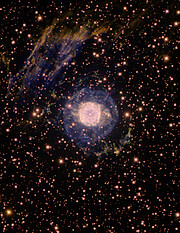