Nathan Smith (University of California – Berkeley), Ken Hinkle (NOAO) and Nils Ride (Lund Observatory) have used the near infrared spectrograph PHOENIX on Gemini South to study the geometry and kinematics of the active circumstellar envelopes in the supergiant stars Betelgeuse and VY Canis Majoris. These two stars are shedding huge amounts of mass in their “last gasps” and could explode as supernovae any time now.

Stars with initial mass of 20-40 solar mass are important, because their complex post-main sequence evolution is determined by their poorly understood mass loss. Massive stars shed copious amount of mass before exploding as supernovae; as instability of the interior and outer layers increases, such episodes of mass loss may be extremely intense in the late phases.

Sampling the observable circumstellar envelopes around nearby massive stars can help to predict what type of supernovae we might expect in the event that they explode. Many of the observed properties of supernovae are determined by their environment as it is being struck by the expanding blast wave. Understanding the nature of supernovae progenitors is essential for the study of core-collapse supernovae in other galaxies at large distances.

The authors present the results of their multi-slit spectroscopy of the rich envelope of Betelgeuse and VY CMa, two evolved red supergiants that are shedding copious amount of material.

For Betelgeuse (at a distance of about 200 parsecs, ~650 light years), they find a mildly clumpy, otherwise spherical shell, from CO emission mapped within 3 arcseconds (100 to 1000 astronomical units) of the star (Figure 1). CO emission (at velocities ranging from +5 to +35 km/sec.) was also detected (Figure 2). Betelgeuse's environment appears shaped by a steady stellar wind and constant flow of dM/dt ~ 2 x 10-6 Msun/year over the past ~300 years. If Betelgeuse exploded now, it would produce a luminous Type II supernova with a blast wave expanding at about 15,000 km/sec. During its brightest phase, the wave would sweep through the portion of the envelope mapped here (Figure 1) with PHOENIX.

In the case of VY CMa (at a distance of about 1.5 kiloparsecs, 4,900 light years), which has prodigious mass loss, the CO emission is coincident with the bright KI shell in its clumpy asymmetric reflection nebula. If the star exploded, it would be different from Betelgeuse because its current mass-loss is 100 times larger than that of Betelgeuse; its envelope is also very inhomogeneous, resulting from multiple mass ejections in the last 1000 years. To a distant observer, an exploded VY CMa would appear as a bona fide SN IIn with a blast wave with a velocity of a few thousands of kilometers-per-second. This explosion would be moderately luminous and long lasting, with detectable interaction with the surrounding envelope for about a decade after the explosion. 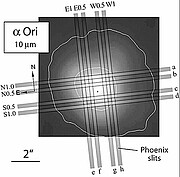 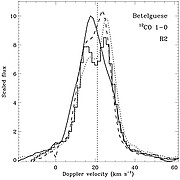 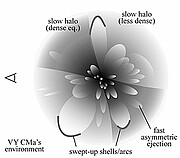