An international team led by Mariska Kriek of Leiden Observatory (Holland) and Yale University has found that 45% of a small sample (20) of massive high-redshift galaxies exhibit very low or no star formation activity. The existence of "red and dead" massive galaxies at a time when the universe was between 1/4 to a 1/3 of its current age is surprising.

During the past few years our knowledge of galaxy formation evolution has grown significantly. Several recent papers indicate that most of the stars in high-mass galaxies were formed at a higher redshift (earlier in the history of the universe) than those of low mass galaxies. This newly published work puts a new twist on the growing evidence that most massive galaxies formed at an extremely early epoch in the universe.

Kriek's team used the Near Infrared Spectrograph (GNIRS) at Gemini South to study twenty galaxies having redshifts that ranged between 2.0 < z < 2.7. They found a surprising number of galaxies (9) with no detected emission lines. The galaxies were selected from a sample of galaxies with K magnitudes brighter than 19.7, ensuring adequate signal-to-noise ratio in the near-infrared spectra. The selected galaxies are relatively massive, ranging between 0.9 - 4.6 x 1011 Msun.

It is suggested that feedback mechanisms like supernova or active galactic nuclei (AGN)-driven mass loss could produce the dead massive galaxies seen in this work. Injection of huge amounts of mechanical energy and momentum over a relatively short period may remove a huge fraction of the galaxy's gas in a short time and heat the remaining interstellar medium, making it stable against gravitational collapse. Furthermore, some of the line-emission in the sample may not be due to star formation. The high [NII]/Hα in some galaxies suggest the possibility of emission produce by AGN activity. Such activity could also clear the gas from the dense central regions of these galaxies. 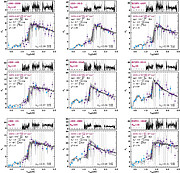