Cluster galaxies are older than field galaxies;and the age gap increases with mass...

As the 100th refereed paper based on GMOS-North data, this work represents a significant milestone for the productivity of the Gemini telescopes and its instrument set. GMOS-North was commissioned on the Gemini North Telescope in late 2001.

There are now many studies of the distant universe that have explored the formation and evolution of galaxies when the universe was less than half its current age (see related Gemini stories from: January 5, 2004, May 18, 2004 and July 7, 2004). The emerging view is that a significant fraction of the most massive galaxies were already in place only a few billions years following the Big Bang, and that the less massive galaxies take more time to assemble. Big ones, first; little ones after, and more slowly. This way of forming and evolving galaxies is referred to as the downsizing scenario. A different scenario is the hierarchical model with big galaxies building up slowly with time as they assemble from the coalescence of smaller galaxies or proto-galaxies.

A less known effect is that of the environment. Do galaxies form differently in the dense environment of clusters compared to the general field?

Galaxy clusters provide much denser environments than the general field. In works published during the last year, comparing two large galaxy clusters at redshift z = 0.835 and 0.892 with the nearby Coma Cluster, Jørgensen et al. demonstrated that low-mass galaxies have later and more prolonged star formation than massive ones. Figure 1 shows a color image of the redshift 0.892 cluster based on the HST imaging.

A clear and important result is the lack of recently formed massive early-type galaxies either in the field or in the clusters. In particular all early type galaxies with mass M > 3 x 1011 Msun have a lookback time to formation larger than 10 billion years (or zformation > 2). More massive galaxies are older than lower mass galaxies in all environments. Cluster galaxies are older than field galaxies of the same mass, clearly indicating that the high-density environment of the cluster has an impact. Furthermore, and this is a completely new result, the age difference between cluster and field galaxies of a same given mass increase as mass increases. This is shown in Figure 2 as the lookback time to formation versus the galaxy masses for the individual galaxies in the sample. Figure 3 shows the average lookback time versus galaxy masses, and the average time difference between the cluster and field galaxies versus galaxy masses.

Thus, the first early-type galaxies that formed in the universe were the most massive ones in galaxy clusters. The last to form are the low mass (early-type) galaxies in the field, they are quite contemporaneous to the cluster galaxies.

For more details see the article: "The influence of mass and environment on the evolution of early-type galaxies," by Sperello di Serego Alighieri, Barbara Lanzoni & Inger Jørgensen, 2006, The Astrophysical Journal Letters, in press. For results on the high redshift clusters, see the article: "The Fundamental Plane for z=0.8-0.9 Cluster Galaxies," by Inger Jørgensen et al., 2006, The Astrophysical Journal Letters, 639, L9-L12 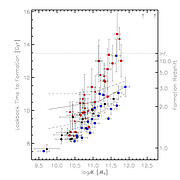 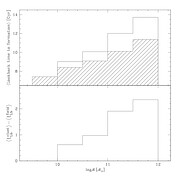