Using Gemini observations of globular clusters in NGC 3379 (M105), a team led by PhD student Michael Pierce and Prof. Duncan Forbes of Swinburne University in Australia, have found evidence for normal quantities of dark matter in the galaxy’s dark halo. This is contrary to previous observations of planetary nebulae that indicated a paucity of dark matter in the galaxy.

The observations of 22 globular clusters in the Leo Group elliptical galaxy were made using the Gemini Multi-Object Spectrograph (GMOS) on Gemini North in early 2003. The data were obtained in the GMOS multi-slit mode with exposures of 10 hours on-source at a spectral resolution of FWHM ~4Å over an effective wavelength range of 3800Å-6660Å. The final spectra have a signal-to-noise ratio of 18-58/Å at 5000 Å. The spectroscopic data allowed the team to derive ages, metallicities and α-element abundance ratios for the sample of globular clusters. All of the globular clusters were found to be >~ 10 Gyr, with a wide range of metallicities. A trend of decreasing α-element abundance ratio with increasing metallicity is also identified.

Most significantly, including 14 extra globular clusters from Puzia, et al. (2004), the projected velocity dispersion of the globular cluster system was found to be constant with radius from the galaxy center, indicating significant dark matter at large radii in its halo. This result is in stark contrast to the “No/Low Dark Matter” interpretation by Romanowsky, et al. (2003) in the journal Science using observations of planetary nebula that indicated a decrease in the velocity dispersion profile with radius.

Reconciling the two velocity dispersion profiles is possible. Dekel, et al. (2005) recently showed that stellar orbits in the outer regions of merger-remnant elliptical galaxies are elongated and that declining planetary nebula velocity dispersions do not necessarily imply a dearth of dark matter.

Another possibility the authors suggest is that NGC 3379 could be a face-on S0 galaxy (as originally suggested by Capaccioli, et al. 1991). If a significant fraction of the planetary nebulae belong to the disk, this could suppress the line-of-sight velocity dispersion of the planetary nebulae relative to that of the globular clusters that lie in a more spherical halo.

These results are currently in press for publication in the Monthly Notices of the Royal Astronomical Society. The accepted version of the paper is available on astro-ph/0510838

The research team includes members from Australia, USA, Canada, Argentina and the UK: 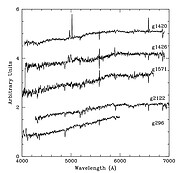 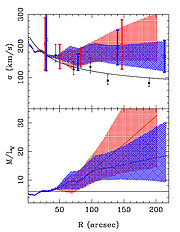