Galaxies Under the Cosmic Microscope: a GMOS-North Study of the Lensed Galaxy #289 in A 2218

The deflection of light by the deep gravitational potential of galaxy clusters can be harnessed to greatly increase the effective collecting area of astronomical telescopes. Mark Swinbank (Ph.D. student at the University of Durham, U.K.) and his international team used Gemini's Multi-Object Spectrograph with Integral Field Unit (GMOS-IFU) on The Frederick C. Gillett Gemini Telescope (Gemini North) to exploit the rich galaxy cluster A 2218. They used A 2218 as a magnifying glass to observe distant background galaxies at a comparable level of detail to galaxies at redshift z ~ 0.1. This work is part of Mark's Ph. D. project––to explore the Tully-Fisher relation and chemical abundance gradients in distant young galaxies.

Swinbank et al., report on their first result of spatially-resolved [OII]3727 nebular gas emission from a lensed galaxy at a redshift z=1.034. This corresponds to an epoch half the present age of the universe. Using a detailed model for the cluster internal mass distribution, taking into account both visible and dark matter, they were able to correct the apparent distorted shape of the galaxy for the lensing by the cluster. The researchers reconstructed the source morphology and derived the velocity field of the interstellar gas in this distant object (Figures 2 and 3).

In addition to distorting images of background objects, gravitational lenses amplify their intensity several times. In the case of the #289, the overall light magnification is a factor of 4.92+/-0.15. This leads to a rest-frame absolute I-band magnitude of MI rest = - 22.4+/-0.2, which makes the #289 galaxy something of an equivalent of our neighbor M31 undergoing a relatively intense star forming episode.

The rotational circular velocity, corrected for the inclination in the plane of the sky, is 206+/-18 km/s (see rotation curve in the inset of Figure 4). The galaxy lies very close to the mean Tully-Fisher relation of present day spirals (Figure 4). The Tully-Fisher relation is a relationship that exists between a spiral galaxy's luminosity and its maximum rotation velocity. The behavior of the relation favors a clear preference for hierarchical formation model indicated by the apparent small change in the I-band magnitudes over a large range of redshifts, which is illustrated by arc #289.

Gravitational optics provides a powerful tool to study the nature of mass assembly, chemistry and star forming activity in galaxies at early epochs. The methods that have been developed in this Gemini-based study show the potential of IFU observations of gravitational lensed galaxies as a means of studying the spatially resolved properties of high redshift galaxies in a remarkable level of detail. 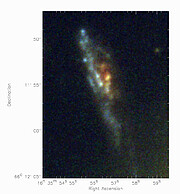 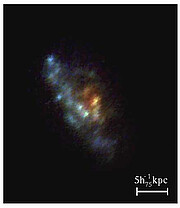 PR Image geminiann03016c
The reconstructed image of the arc corrected for lens amplification. 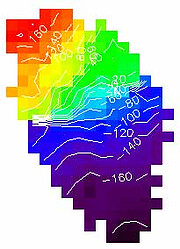