PHOENIX on Gemini South Reveals Clues about the Origin of Fluorine

PHOENIX was used to sample multiple stellar atmospheres and has revealed tantalizing clues that neutrino interaction during the supernovae explosion of massive stars is involved in the genesis of fluorine. PHOENIX uses a Gemini supplied 1024 x 1024 InSb Aladdin II array.

Despite our awareness of fluorine's unique properties, its astrophysical origin is not well understood. Like most heavy elements, fluorine is a product of nuclear reactions in the hot cores of stars during various phases of their evolution. Furthermore, fluorine is not easy to observe in the universe, and very few spectroscopic measurements of fluorine in stars exist. Until the recent Gemini work reported here, only a meager set of data for a few stars in our own Milky Way was available.

A spectroscopic program conducted at Gemini South, located on Cerro Pachón, Chile, has changed this picture. Katia Cunha (Observatório Nacional, Brazil) led a PHOENIX team of researchers on Gemini South to measure the abundance of fluorine in our own galaxy's satellite, the Large Magellanic Cloud (LMC), and in the massive galactic globular cluster ω Centauri. The team studied fluorine in its most accessible form, hydrofluoric acid (HF), which is detectable through vibration-rotation transitions falling in the near infrared close to the wavelength of 2.3 microns (main figure and Figure 1). These Gemini observations provide unique insight on how fluorine behaves as a function of the abundance of the other elements, specifically metals, helping to identify how fluorine is made.

To better understand how the abundance of fluorine depends on metallicity and stellar populations, Cunha and her collaborators compared their Gemini measurements with known K and M type stars of our own Milky Way. The total sample of stars with fluorine abundance determinations contains 23 red giant stars across three stellar populations including the solar neighborhood, ω Centauri and the LMC. It is to be noted that the abundance of fluorine, like that of other elements, does not only depend on the yield from nucleosynthesis processes. Star formation history and element dispersal mechanisms can also play important roles.

Nine red giants stars in the LMC and two in ω Centauri were observed with PHOENIX. The behavior of the fluorine abundance as a function of oxygen (Figure 2) and iron (Figure 3) show definite trends. The figures clearly reveal that the ratio of fluorine to oxygen [F/O] decreases from the near-solar metallicity galactic stars, to lower metallicity LMC giants and Arcturus (α Bootis). Oxygen is produced in the supernova explosions of stars with masses greater than ~8-10 Msun (SN II). In contrast, iron is mostly from lower mass stars supernovae (SNI).

The main mechanisms for producing fluorine in stars are: (1) neutrino-induced spallation of a proton from Neon-20, referred to as the neutrino process; (2) synthesis from helium capture by Nitrogen-14 during asymtoptic giant branch (AGB) thermal pulses; and (3) production of Fluorine-19 in the cores of massive Wolf-Rayet (W-R) stars. Because the ω Centauri stars show depletion of fluorine instead of enrichment, the authors easily discard the AGB stars as an important cradle of fluorine. For Wolf-Rayet stars to be major providers of fluorine, they need to undergo, more substantial mass loss than currently accepted.

Although a W-R source cannot be excluded at this stage, the best bet is the neutrino process of spallation in supernovae of massive stars (SN II). Models of neutrino nucleosynthesis predict that the [F/O] ratio declines steadily as oxygen declines. This is shown very clearly in Figure 4.

The ω Centauri red giants stand out from this prediction and trend. We know that ω Centauri had 3 or 4 major isolated episodes of star formation, which ended several billions years ago, giving the cluster its wide range of metal abundance. In contrast, the Milky and the LMC are undergoing continuous star formation.

Taking into account the different star-formation histories, the authors conclude that the dependence of [F/O] on A(O) - as measured in Galactic LMC and ω Centauri red giant stars is best explained by the chemical evolution models using the known neutrino spallation present in massive supernovae, and that these explosions must be the principal source of fluorine-19.

Fluorine - not just for teeth!

Fluorine is a relatively light element with a nucleus of nine protons and ten neutrons. Its second shell has seven electrons and falls one short of the eight electrons that would fully complete the second electron shell - as it does with the next element Neon-20, which is a noble gas. Because of its incomplete second electron shell, fluorine is the most reactive and electronegative of all elements. It reacts with almost all organic and inorganic substances. Water even burns in fluorine. Due to its avidity for electron donors, it does not easily exist or survive on its own.

The French chemist Ferdinand Frederic Henri Moissant isolated fluorine in 1886, and won the 1906 Nobel Prize for Chemistry for his impressive work. Because of its unique, difficult and dangerous properties, uses for fluorine have only recently been discovered. It is mainly used in sophisticated chemical processes, such as the production of high temperature plastics and the isolation of the isotopes of uranium. Fluorine also has other, more common uses. When mixed in extremely small quantities in municipal water (one part per billion) and in dental paste, fluorine effectively prevents tooth decay. Crystals of calcium fluoride (CaF2), also known as fluorite and fluorspar, are used to make lenses. 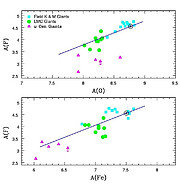 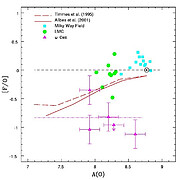