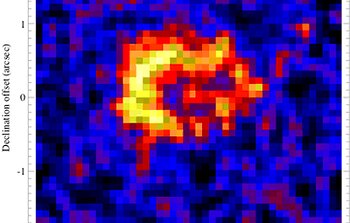 noaoann04017 — Announcement
First High-Res Image of Dust Around Supernova 1987A
27 July 2004: Infrared observations of SN 1987A made in October 2003 as part of the checkout of the new Thermal-Region Camera Spectrograph (T-ReCS) instrument on Gemini South have revealed emission from a cool dust ring that is surprisingly luminous. It co-exists with hot gas components left over from the relic equatorial ring featured prominently in data from other observatories in wavelengths from X-ray to radio.
Read more

geminiann04009 — Announcement
Gemini South Obtains First High-Resolution Image of Dust Around Supernova 1987A
21 July 2004: Infrared observations of Supernova 1987A made in October 2003 as part of the “checkout” of the new Thermal-Region Camera Spectrograph (T-ReCS) instrument on Gemini South have revealed dust emissions at a wavelength of 10 microns, corresponding to a temperature of about 150 degrees Kelvin. They are coming from a cool dust ring that is surprisingly luminous. It co-exists with hot gas components left over from the relic equatorial ring so prominently featured in images and data from other observatories in wavelengths from X-ray to radio. This T-ReCS observation is the first detection of mid-infrared emission from the ejecta ring of SN1987A in five years. The similarity of Gemini’s 10-micron image with those taken in X-ray images obtained by the Chandra Observatory, and at radio frequencies from the Australian National Telescope Facility, suggests that the thermal emission is due to the recent heating of pre-existing dust in the equatorial ring by ...
Read more 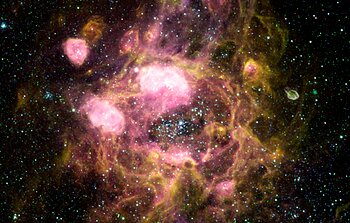 noaoann04016 — Announcement
N11 in the LMC
16 July 2004: An image of N11 in the Large Magellanic Cloud, taken with the Curtis Schmidt telescope at Cerro Tololo Inter-American Observatory (CTIO) as part of the Magellanic Clouds Emission-Line Survey (MCELS). This color image was produced using three separate exposures taken in hydrogen, sulfur and oxygen bandpasses. It was used to support the July 2004 release by the Hubble Heritage project.
Read more 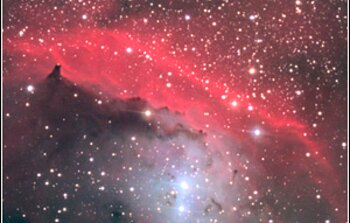 noaoann04015 — Announcement
NGC 6559
8 July 2004: Some 5,000 light years from Earth, toward the asterism of Sagittarius, lies the emission nebula NGC 6559. Hydrogen gas is responsible for the diffuse red glow, while dark clouds of dust absorb much of the nebula's star light. Smaller dust particles scatter the blue light from the bright stars in the bottom half of the image, creating the beautiful blue and purple reflection nebulosity.
Read more 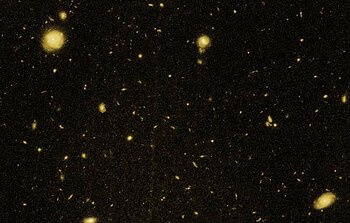 geminiann04008 — Announcement
A high abundance of massive galaxies 3-6 billion years after the Big Bang
7 July 2004: A Gemini team led by Karl Galzebrook of Johns Hopkins University has just released some spectacular results obtained from the Gemini Deep Deep Survey (GDDS) in the British journal Nature. The team found that at last two-thirds of massive galaxies appeared after the first 3 billion years following the Big Bang. However, a significant fraction of them are already in place in the early Universe. The GDDS was completed using the Gemini North telescope and the Gemini Multi-Object Spectrograph (GMOS-N). The team observed four widely-separated 30 arcmin2 fields. The spectroscopic exposure time for each field was about 30,000 seconds. The spectrograph was operated in the Nod & Shuffle mode. This technique enables the removal of contamination by the earth’s atmospheric luminescence to a high degree. Spectra of several hundred distant galaxies were obtained and measured. As has been suspected, massive, evolved galaxies are found at an epoch earlier than half ...
Read more 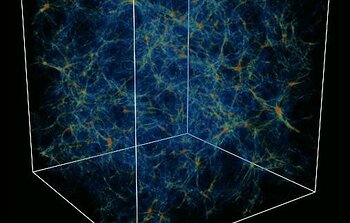 geminiann04007 — Announcement
Gemini, Subaru & Keck Discover large-scale funneling of matter onto a massive distant galaxy cluster
30 June 2004: Large galaxy clusters represent the largest gravitationally stable assemblies of matter in the universe. Massive clusters of galaxies consist of thousands of galaxies and vast quantities of extremely hot intergalactic gas all held together by gravity. It is believed that clusters of galaxies grow in size and in number through time and we see many more galaxy clusters in the nearby (recent) universe than in the distant past. The assembly and growth of massive clusters involve complex interactions between dark matter, diffuse gas, and thousands of individual galaxies. The physical details of these interactions are currently not fully understood. Both computer simulations and theoretical work predict that the growth process of massive clusters is highly non-isotropic with the in-fall of matter and galaxy mergers occurring along preferred directions. The coalescence and funneling of matter should produce highly correlated structures in space, enhancing visibility in these preferred directions. This is referred ...
Read more 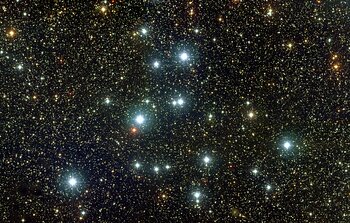 noaoann04014 — Announcement
M39
29 June 2004: This loose, widely spaced open cluster is found in the constellation Cygnus, about 800 light-years away. Also known as NGC7092, it has around 30 members and is two to three hundred million years old. This picture is a combination of 33 dithered frames in BVR colors taken with the Mosaic camera at the WIYN 0.9-meter telescope on Kitt Peak, near Tucson, Arizona
Read more 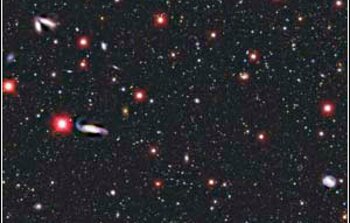 noaoann04013 — Announcement
Young Galaxy in the Very Early Universe
18 June 2004: Astronomers using a combination of data sets from the Mayall telescope at Kitt Peak, including the NOAO Deep Wide-Field Survey (image above), have found a galaxy that formed when the Universe was just six percent of its present age, suggesting the "dark ages" of the early universe ended in a patchy, gradual process.
Read more

noaoann04012 — Announcement
Galaxy Cleaned Out by Encounter with Hot Cluster Gas
3 June 2004: This three-color composite image of spiral galaxy NGC 4402 shows several key lines of evidence for the galaxy being stripped bare of its star-forming material by its violent ongoing encounter with the hot gas in the center of the Virgo galaxy cluster, as NGC 4402 falls into it. Released at the AAS meeting in Denver.
Read more 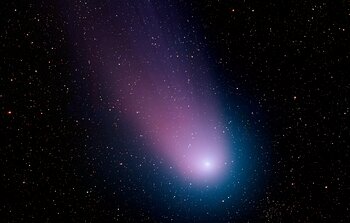 noaoann04011 — Announcement
Close-up of Comet NEAT
26 May 2004: This image of Comet C/2001 Q4 (NEAT) was taken with the Mosaic I camera at the WIYN 0.9-meter telescope at Kitt Peak National Observatory near Tucson, AZ, on May 7, 2004. The comet will remain visible for several weeks with binoculars and small telescopes just after sunset, high in the western sky. See also NOAO Press Release 04-04.
Read more 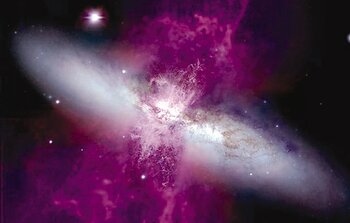 noaoann04010 — Announcement
Starburst Eye of a Galaxy Produces a Cosmic Shower
21 May 2004: Combining images from the Hubble Space Telescope (HST) and the WIYN Telescope on Kitt Peak, near Tucson, Ariz., this image is a color-coded picture of the archetypal starburst galaxy M82. It shows the horizontal stellar disk of the galaxy, which harbors its active star formation, and a perpendicular supergalactic wind of ionized gas powered by the energy released in the starburst. See also University of Wisconsin-Madison press release.
Read more

geminiann04006 — Announcement
The Gemini Deep Deep Survey Opens a New Window Into the Distant Universe of Galaxy Assembly
18 May 2004: May 18, 2004 Using a sophisticated technique called Nod & Shuffle, combined with the Gemini Multi-Object Spectrograph, ultra-deep spectra of several hundred distant, elusive galaxies were captured. These observations by the Frederick C. Gillett Gemini North Telescope help to paint a new picture of the nature and evolution of galaxies some 7 - 10 billion years ago. Multiple recent discoveries of galaxies at very high redshifts have opened a fascinating window into what happened less than a billion year after the Big Bang. However, there is a more recent time interval in the past history of the universe that has remained relatively unexplored until very recently. The so-called "redshift desert" corresponds to an era when the universe was between one-third and one-half its present age (between redshifts 1 < z <2). Relatively little is known of the galaxies in this period due to a combination of intrinsically faint galaxy spectra ...
Read more 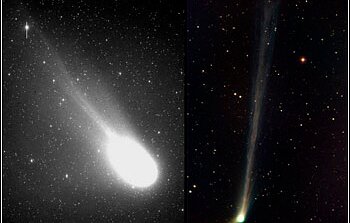 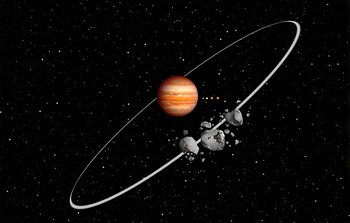 geminiann04005 — Announcement
Waltzing Irregular Satellites Around Jupiter and Saturn
4 May 2004: Gemini North Near Infrared Imager (NIRI) observations have confirmed that many of the "irregular" satellites around Jupiter and Saturn share a common ancestry. All the known planets of the solar system have moons, except for Mercury and Venus. Out in the realm of the gas giants large numbers of little worlds swarm around Jupiter, Saturn, Uranus, and Neptune. The "regular" satellites (often the largest and brightest) go around their planets in a prograde direction (the same direction as all the planet orbits around the Sun). They probably formed in planetocentric disks with nearly circular prograde orbits close to the equatorial plane of their planets. But the gas giants also have a surprisingly large retinue of "irregular" satellites (smaller and fainter) on highly inclined and eccentric orbits, both prograde and retrograde. Their "chaotic" orbits suggest that these small worlds formed outside circumplanetary disks and were captured by gravitational influences. Irregular satellites ...
Read more 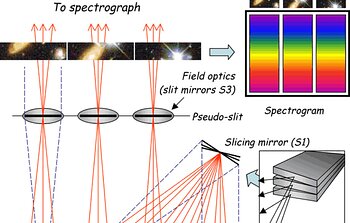 geminiann04004 — Announcement
Gemini-South's Near-Infrared Spectrograph Gets 3-D vision
27 April 2004: The new GNIRS Integral Field Unit (IFU) arrived on Cerro Pachón (Gemini South) in February in a deceptively small package. The new IFU is about the size of a large paperback, but contains some 66 miniature optical elements. Designed and built by the University of Durham (UK), the IFU fits in the GNIRS slit slide mechanism, providing an alternative input "aperture" to the variety of traditional slit masks that feed the long-slit and cross-dispersed configurations of the instrument. With the IFU in the optical path, a 2-dimensional input field of roughly 3” x 5” is divided into 21 slices of 0.15” x 4.9” each. Then these are arranged end-to-end to form a pseudo-slit that is dispersed by one of the spectrograph's three gratings as if it was a normal long-slit. This gives GNIRS the ability to form spectra of each 0.15” x 0.15” sample over the entire field without gaps. ...
Read more 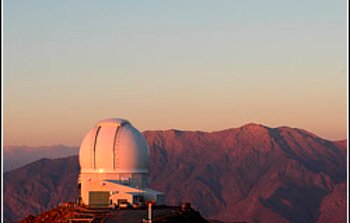 noaoann04008 — Announcement
SOAR: A 21st Century 4-meter Telescope
15 April 2004: Sitting on Cerro Pachón, a few hundred meters from the 8-m Gemini South telescope, and within view of NOAO’s Cerro Tololo Inter-American Observatory, the SOuthern Astrophysical Research (SOAR) telescope was dedicated on April 17, and is expected to begin routine science operation in late 2004. This 4.1-meter aperture telescope, funded by a partnership between the U.S. National Optical Astronomy Observatory (NOAO), the country of Brazil, Michigan State University, and the University of North Carolina at Chapel Hill, is designed to produce the best quality images of any observatory in its class in the world.
Read more 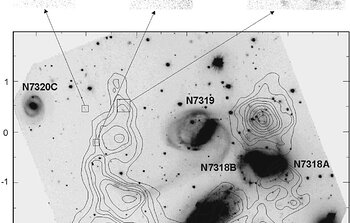 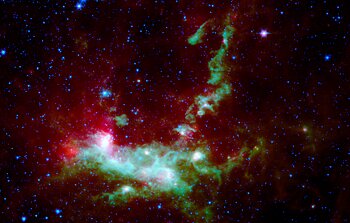 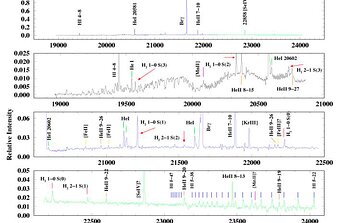 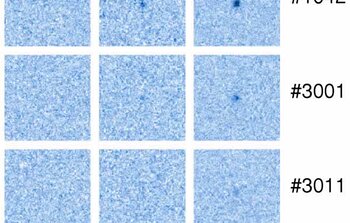 geminiann04002 — Announcement
Gemini Probes Galaxy Evolution a Billion Years After the Big Bang
8 March 2004: The GLARE (Gemini Lyman Alpha at Reionisation Era) team, an international group of astronomers using Gemini to study the early universe, has just discovered a surprisingly large number (three) very high redshift galaxies ( z = 5.83, 5.79 and 5.94) in a same region of the southern GOODS field. Two of the Lyman alpha emitters measured are the faintest of any previous spectroscopic study. The objects are red (i' - z') > 1.3 and the faintest one has a z' magnitude of 27.15. This finding suggests the existence of large-scale structure at this redshift. This field is very close to the Hubble Ultra-Deep Field (UDF), a small portion of sky in the southern hemisphere recently imaged by the Hubble Space Telescope. The UDF is the deepest imaging ever done of a region in the sky. The completed survey and the images are being released by the Space Telescope Science Institute. ...
Read more
Showing 21 to 40 of 46
Usage of NOIRLab Images and Videos
Are you a journalist? Subscribe to the NOIRLab Media Newsletter.