The Project Director of the US Extremely Large Telescope Program (US-ELTP), Sidney Wolff, has announced her retirement, leaving behind a legacy of nearly fifty years leading the United States’s top ground-based observatories.

Stepping up as the new Project Director of the US-ELTP is NOIRLab’s Deputy Director, Beth Willman.

The US-ELTP is a collaboration between NOIRLab, the Giant Magellan Telescope (GMT) and the Thirty Meter Telescope (TMT), coordinating efforts to build the next-generation of 25–30-meter aperture ground-based telescopes, one in each hemisphere. The US-ELTP recently came top in the list of priorities for ground-based observatories in the National Academies of Sciences, Engineering, and Medicine’s Astro2020 Decadal Survey, which recommends the direction of US astronomy over the next ten years.

Wolff has shepherded the fledgling US-ELTP through its critical formative years, preparing it for the Astro2020 report and establishing a firm foundation for working with the National Science Foundation (NSF), both of which are deemed essential for the success of the project.

As a graduate student at the University of California, Berkeley, Wolff studied magnetic A-type stars, which are hotter and more massive than the Sun and also have unusually large abundances of rare earth elements. In the 1967 Wolff moved to Hawai‘i, where she continued her work on stellar spectroscopy and worked first as Assistant Director and then Acting Director of the Institute for Astronomy at the University of Hawai‘i, proving to be a lynchpin in cementing Maunakea as a center for observational excellence, with the development of world-leading telescopes at its approximately 4300-meter (~14,000-feet) peak. Her success in Hawai‘i saw her join the Kitt Peak National Observatory (KPNO) as Director between 1984 and 1987. In doing so, Wolff blazed a trail for women in astronomy by being the first US woman to lead a major observatory.

Wolff left KPNO to take on the role of Director of one of NOIRLab’s predecessors, the National Optical Astronomy Observatory (NOAO), becoming its longest-serving director, until she stepped down from the position at the end of 1999. Wolff also acted as the first Director of the Gemini Project between 1992 and 1994, which ultimately saw the construction of the Gemini North and Gemini South telescopes. She subsequently led the design and development phase of Vera C. Rubin Observatory.

As Wolff enjoys a well-earned retirement, Beth Willman has assumed the duties of Project Director of the US-ELTP as of 15 November 2021, while continuing in her role as Deputy Director of NOIRLab. Willman is a former deputy director of Rubin Observatory, which will begin scientific operations in Chile in 2023, and during two decades of research has specialized in near-field cosmology, even discovering the first known ultra-faint galaxy in the Universe, Willman 1.

“I want to thank Sidney for her long and glorious career serving US astronomy," said Willman. "I'm honored to continue her legacy and help bring the US-ELTP to fruition" 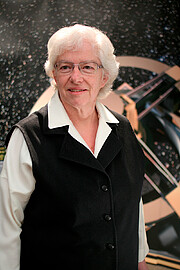