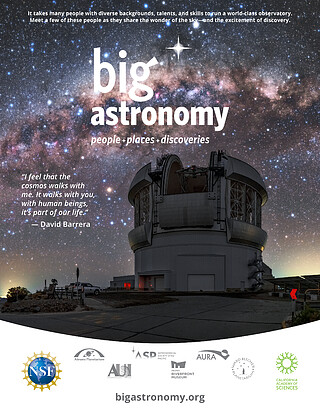 Big Astronomy or Astronomia a Gran Escala shares the story of the people and places who make big astronomy and big science happen. The planetarium show transports viewers to Chile where the dark skies and dry, remote setting create ideal conditions to observe the Universe. By 2022, it is expected that most of the world’s ground-based observing infrastructure will be located in Chile, and the US and other countries are investing billions of dollars in furthering astronomy partnerships in the country. Big Astronomy introduces audiences to a wide variety of people involved in advancing astronomical discovery.

Produced by the California Academy of Sciences, the Big Astronomy planetarium show had its world premiere on 26 September 2020.  The NOIRLab facilities in Chile featured in this extraordinary planetarium production are the Cerro Tololo Inter-American Observatory (CTIO) and the international Gemini Observatory. Other facilities featured are the Atacama Large Millimeter/submillimeter Array (ALMA) and Vera C. Rubin Observatory.

About the Planetarium Show