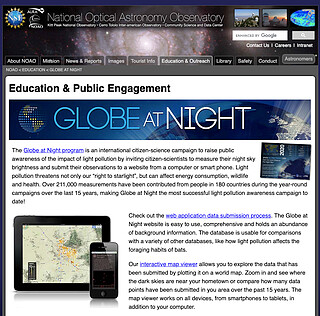 The Globe at Night program is an international citizen-science campaign to raise public awareness of the impact of light pollution by inviting citizen-scientists to measure their night sky brightness and submit their observations to a website from a computer or smart phone. Light pollution threatens not only our “right to starlight”, but can affect energy consumption, wildlife and health. Over 211,000 measurements have been contributed from people in 180 countries during the year-round campaigns over the last 15 years, making Globe at Night the most successful light pollution awareness campaign to date!

About the Citizen Science Program