At a press conference today, NSF's NOIRLab announced that it has been selected, along with the SKA Observatory (SKAO), by the International Astronomical Union to host the new IAU Centre for the Protection of the Dark and Quiet Sky from Satellite Constellation Interference. The center coordinates collaborative multidisciplinary international efforts with institutions and individuals and works across multiple geographic areas to help mitigate the negative impact of satellite constellations on ground-based optical and radio astronomy observations as well as humanity’s enjoyment of the night sky.

NSF’s NOIRLab and the intergovernmental organization the SKA Observatory (SKAO), headquartered in the UK, have been named as co-hosts of the newly established Centre for the Protection of the Dark and Quiet Sky from Satellite Constellation Interference.

"Satellite interference is an increasing problem for ground-based astronomy, and I am pleased NOIRLab will be partnering with our International colleagues at the IAU, and with our radio colleagues at the SKAO to find solutions that meet the needs of the scientific community and the satellite industry," said AURA President Matt Mountain. AURA operates NOIRLab under a cooperative agreement with the NSF. "Continuing to preserve a dark and quiet sky is essential for both astronomy and for sustaining the curiosity of future generations, who find inspiration from simply looking up.”

The International Astronomical Union called for the establishment of the center in 2021. The mission of the center is to coordinate efforts and unify voices across the global astronomical community with regard to the protection of the dark and quiet sky from satellite constellation interference. The center aims to bring together astronomers, satellite operators, regulators and the wider community and acts as a bridge between all stakeholders to protect the dark and quiet skies. The center builds on the vast amount of work carried out by the two host institutions and the international astronomical community, recognizing the various interests of different observatories according to wavelength, existing regulations, and expected impact. Some of this work is outlined in recent reports such as the one from the SATCON2 conference, the reports of the online conferences Dark and Quiet Skies for Science and Society I and II (co-organized by UNOOSA, the IAU and Spain, with support from NOIRLab, and a Conference Room Paper presented to the 58th meeting of the Scientific and Technical Sub-Committee (STSC) of the UN Committee on the Peaceful Uses of Outer Space (COPUOS).

The vision of the center is to become the leading voice for astronomical matters that relate to the protection of the dark and quiet sky from satellite constellations and to act as a hub of information and resources to which any stakeholder group will be able to contribute and from which they can use in support of their own activities.

The staff members for the center are distributed over two main locations: Tucson, Arizona, USA, and Jodrell Bank, near Manchester, United Kingdom. The director is Piero Benvenuti, former IAU General Secretary, and the co-directors are Connie Walker (NSF’s NOIRLab) and Federico Di Vruno (SKAO). A number of organizations [1] have pledged to provide additional support to the center.

Debra Elmegreen, IAU President, notes “The new center is an important step towards ensuring that technological advances do not inadvertently impede our study and enjoyment of the sky. I am confident that the center co-hosts can facilitate global coordination and bring together the necessary expertise from many sectors for this vital effort.”

The SKAO, formally known as the SKA Observatory, is an inter-governmental organisation composed of Member States from five continents. Its mission is to build and operate cutting-edge radio telescopes to transform our understanding of the Universe, and deliver benefits to society through global collaboration and innovation. Headquartered in the UK, its two telescope arrays will be constructed in Australia and South Africa and be the two most advanced radio telescope networks on Earth. A later expansion is envisioned in both countries and other African partner countries. Together with other state-of-the-art research facilities, the SKAO’s telescopes will explore the unknown frontiers of science and deepen our understanding of key processes, including the formation and evolution of galaxies, fundamental physics in extreme environments and the origins of life. Through the development of innovative technologies and its contribution to addressing societal challenges, the SKAO will play its part to address the United Nations’ Sustainable Development Goals and deliver significant benefits across its membership and beyond. The SKAO recognises and acknowledges the Indigenous peoples and cultures that have traditionally lived on the lands on which the SKAO facilities are located.

The IAU is the international astronomical organisation that brings together more than 12 000 active professional astronomers from more than 100 countries worldwide. Its mission is to promote and safeguard astronomy in all its aspects, including research, communication, education and development, through international cooperation. The IAU also serves as the internationally recognised authority for assigning designations to celestial bodies and the surface features on them. Founded in 1919, the IAU is the world's largest professional body for astronomers. 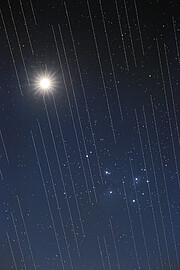 PR Image noirlab2206c
Starlink in front of the Pleiades