Estimated to be 100–200 kilometers across, the unusual wandering body will make its closest approach to the Sun in 2031

A giant comet from the outskirts of our Solar System has been discovered in 6 years of data from the Dark Energy Survey. Comet Bernardinelli-Bernstein is estimated to be about 1000 times more massive than a typical comet, making it arguably the largest comet discovered in modern times. It has an extremely elongated orbit, journeying inward from the distant Oort Cloud over millions of years. It is the most distant comet to be discovered on its incoming path, giving us years to watch it evolve as it approaches the Sun, though it's not predicted to become a naked-eye spectacle.

A giant comet has been discovered by two astronomers following a comprehensive search of data from the Dark Energy Survey (DES). The comet, which is estimated to be 100–200 kilometers across, or about 10 times the diameter of most comets, is an icy relic flung out of the Solar System by the migrating giant planets in the early history of the Solar System. This comet is quite unlike any other seen before and the huge size estimate is based on how much sunlight it reflects.

Pedro Bernardinelli and Gary Bernstein, of the University of Pennsylvania, found the comet — named Comet Bernardinelli-Bernstein (with the designation C/2014 UN271) — hidden among data collected by the 570-megapixel Dark Energy Camera (DECam) mounted on the Víctor M. Blanco 4-meter Telescope at Cerro Tololo Inter-American Observatory (CTIO) in Chile. The analysis of data from the Dark Energy Survey is supported by the Department of Energy (DOE) and the National Science Foundation (NSF), and the DECam science archive is curated by the Community Science and Data Center (CSDC) at NSF’s NOIRLab. CTIO and CSDC are Programs of NOIRLab.

One of the highest-performance, wide-field CCD imagers in the world, DECam was designed specifically for the DES and operated by the DOE and NSF between 2013 and 2019. DECam was funded by the DOE and was built and tested at DOE's Fermilab. At present DECam is used for programs covering a huge range of science.

DES was tasked with mapping 300 million galaxies across a 5000-square-degree area of the night sky, but during its six years of observations it also observed many comets and trans-Neptunian objects passing through the surveyed field. A trans-Neptunian object, or TNO, is an icy body that resides in our Solar System beyond the orbit of Neptune.

Bernardinelli and Bernstein used 15–20 million CPU hours at the National Center for Supercomputing Applications and Fermilab, employing sophisticated identification and tracking algorithms to identify over 800 individual TNOs from among the more than 16 billion individual sources detected in 80,000 exposures taken as part of the DES. Thirty-two of those detections belonged to one object in particular — C/2014 UN271.

Comets are icy bodies that evaporate as they approach the warmth of the Sun, growing their coma and tails. The DES images of the object in 2014–2018 did not show a typical comet tail, but within a day of the announcement of its discovery via the Minor Planet Center, astronomers using the Las Cumbres Observatory network took fresh images of Comet Bernardinelli-Bernstein which revealed that it has grown a coma in the past 3 years, making it officially a comet.

Its current inward journey began at a distance of over 40,000 astronomical units (au) from the Sun — in other words 40,000 times farther from the Sun than Earth is, or 6 trillion kilometers away (3.7 trillion miles or 0.6 light-years — 1/7 of the distance to the nearest star). For comparison, Pluto is 39 au from the Sun, on average. This means that Comet Bernardinelli-Bernstein originated in the Oort Cloud of objects, ejected during the early history of the Solar System. It could be the largest member of the Oort Cloud ever detected, and it is the first comet on an incoming path to be detected so far away.

Comet Bernardinelli-Bernstein is currently much closer to the Sun. It was first seen by DES in 2014 at a distance of 29 au (4 billion kilometers or 2.5 billion miles, roughly the distance of Neptune), and as of June 2021, it was 20 au (3 billion kilometers or 1.8 billion miles, the distance of Uranus) from the Sun and currently shines at magnitude 20. The comet's orbit is perpendicular to the plane of the Solar System and it will reach its closest point to the Sun (known as perihelion) in 2031, when it will be around 11 au away (a bit more than Saturn’s distance from the Sun) — but it will get no closer. Despite the comet’s size, it is currently predicted that skywatchers will require a large amateur telescope to see it, even at its brightest.

"We have the privilege of having discovered perhaps the largest comet ever seen — or at least larger than any well-studied one — and caught it early enough for people to watch it evolve as it approaches and warms up," said Gary Bernstein. "It has not visited the Solar System in more than 3 million years."

Comet Bernardinelli-Bernstein will be followed intensively by the astronomical community, including with NOIRLab facilities, to understand the composition and origin of this massive relic from the birth of our own planet. Astronomers suspect that there may be many more undiscovered comets of this size waiting in the Oort Cloud far beyond Pluto and the Kuiper Belt. These giant comets are thought to have been scattered to the far reaches of the Solar System by the migration of Jupiter, Saturn, Uranus, and Neptune early in their history.

“This is a much needed anchor on the unknown population of large objects in the Oort Cloud and their connection with early migration of the ice/gas giants soon after the Solar System was formed,” said NOIRLab astronomer Tod Lauer.

“These observations demonstrate the value of long-duration survey observations on national facilities like the Blanco telescope,” says Chris Davis, National Science Foundation Program Director for NOIRLab. “Finding huge objects like Comet Bernardinelli-Bernstein is crucial to our understanding of the early history of our Solar System.”

It is not yet known how active and bright it will become when it reaches perihelion. However, Bernardinelli says that Vera C. Rubin Observatory, a future Program of NOIRLab, “will continuously measure Comet Bernardinelli-Bernstein all the way to its perihelion in 2031, and probably find many, many others like it,” allowing astronomers to characterize objects from the Oort Cloud in much greater detail.

This research was reported to the Minor Planet Center.

The Dark Energy Survey (DES) is a collaboration of more than 400 scientists from 25 institutions in seven countries. Funding for the DES Projects has been provided by the US Department of Energy Office of Science, US National Science Foundation, Ministry of Science and Education of Spain, Science and Technology Facilities Council of the United Kingdom, Higher Education Funding Council for England, ETH Zurich for Switzerland, National Center for Supercomputing Applications at the University of Illinois at Urbana-Champaign, Kavli Institute of Cosmological Physics at the University of Chicago, Center for Cosmology and AstroParticle Physics at Ohio State University, Mitchell Institute for Fundamental Physics and Astronomy at Texas A&M University, Financiadora de Estudos e Projetos, Fundação Carlos Chagas Filho de Amparo à Pesquisa do Estado do Rio de Janeiro, Conselho Nacional de Desenvolvimento Científico e Tecnológico and Ministério da Ciência e Tecnologia, Deutsche Forschungsgemeinschaft, and the collaborating institutions in the Dark Energy Survey.

NCSA at the University of Illinois at Urbana-Champaign provides supercomputing and advanced digital resources for the nation’s science enterprise. At NCSA, University of Illinois faculty, staff, students and collaborators from around the globe use advanced digital resources to address research grand challenges for the benefit of science and society. NCSA has been advancing one third of the Fortune 50® for more than 30 years by bringing industry, researchers and students together to solve grand challenges at rapid speed and scale. For more information.

Fermilab is America’s premier national laboratory for particle physics and accelerator research. A US Department of Energy Office of Science laboratory, Fermilab is located near Chicago, Illinois, and operated under contract by the Fermi Research Alliance LLC. Follow Fermilab on Twitter at @Fermilab.

Bernardinelli and Bernstein’s search was partially supported by a grant from the National Science Foundation. 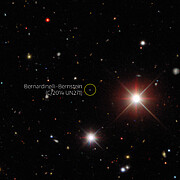 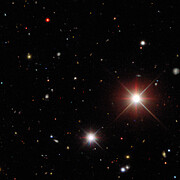