Deep Dive into a Galaxy Cluster

A stunning long-exposure observation from the Kitt Peak National Observatory reveals the spiral galaxy NGC 1003 in glorious detail. The deep observation also shows a treasure trove of background galaxies spread throughout the image.

Astronomers refer to observations as “deep” when they are taken with very long exposure times. Just as with photography, this gathers more light, revealing distant, fainter objects. Deeper exposures let astronomers look deeper into the Universe — hence the name. This particular deep image was taken with a 70-minute exposure with the Nicholas U. Mayall 4-meter Telescope at Kitt Peak National Observatory, a Program of NSF’s NOIRLab, and captures the spiral galaxy NGC 1003.

NGC 1003 lies over 30 million light-years from Earth in the direction of the constellation Perseus. While it makes for a spectacular sight, it is only one of many galaxies captured in this image. Upon closer inspection, other galaxies can also be seen strewn throughout the image, with everything from delicate spiral galaxies to hundreds of fuzzy, red elliptical galaxies lurking in the background. The long exposure time of this deep observation — arguably the deepest image of NGC 1003 ever captured — allowed these usually overlooked background cluster galaxies to be captured in breathtaking detail.

Deep images such as this one have had an important role in shaping our understanding of the Universe. In 1995, the Hubble Space Telescope famously observed a tiny, nondescript patch of sky for 10 days to create the Hubble Deep Field. The observations revealed thousands of distinct galaxies, showing that our Universe is a surprisingly crowded place.

While the Hubble team deliberately avoided bright galaxies for their observation, this ground-based observation is littered with galaxies of all shapes and sizes — a spectacular backdrop for this portrait of NGC 1003. As well as revealing the host of background galaxies, the long exposure time of this observation allowed the researchers to capture the faint outer reaches of NGC 1003, which are threaded through with bright tendrils of stars. Equally eye-catching is the bright heart of the galaxy, which is surrounded by clouds of dense dust.

NGC 1003 resides in front of a galaxy cluster — a vast collection of galaxies bound together by gravity. These structures are among the most massive in the known Universe, and outweigh the Sun by a factor of a thousand trillion. Just as stars can be grouped into clusters, and these star clusters into galaxies, galaxies themselves form clusters and even superclusters — building up the large-scale structure of our Universe. 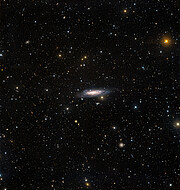