A collaboration between the LOw Frequency ARray (LOFAR) radio telescope in Europe, the Gemini North telescope, and the NASA InfraRed Telescope Facility (IRTF), both on Maunakea in Hawai‘i, has led to the first direct discovery of a cold brown dwarf from its radio wavelength emission. Along with paving the way for future brown dwarf discoveries, this result is an important step towards applying radio astronomy to the exciting field of exoplanets.

For the first time, astronomers have used observations from the LOFAR radio telescope, the NASA IRTF, operated by the University of Hawai‘i, and the international Gemini Observatory, a Program of NSF’s NOIRLab, to discover and characterize a cold brown dwarf. The object, designated BDR J1750+3809, is the first substellar object to be discovered through radio observations — until now, brown dwarfs have been uncovered in large infrared and optical surveys. Directly discovering these objects with sensitive radio telescopes such as LOFAR is a significant breakthrough because it demonstrates that astronomers can detect objects that are too cold and faint to be found in existing infrared surveys — maybe even large free-floating exoplanets.

“In this discovery, Gemini was particularly important because it identified the object as a brown dwarf and also gave us an indication of the temperature of the object,” explained lead author Harish Vedantham of ASTRON, the Netherlands Institute for Radio Astronomy. “The Gemini observations told us that the object was cold enough for methane to form in its atmosphere — showing us that the object is a close cousin of Solar System planets like Jupiter.”

Brown dwarfs are substellar objects straddling the boundary between the largest planets and the smallest stars [1]. Occasionally dubbed failed stars, brown dwarfs lack the mass to trigger hydrogen fusion in their cores, instead glowing at infrared wavelengths with leftover heat from their formation. While they lack the fusion reactions that keep our Sun shining, brown dwarfs can emit light at radio wavelengths. The underlying process powering this radio emission is familiar, as it occurs in the largest planet in the Solar System. Jupiter’s powerful magnetic field accelerates charged particles such as electrons, which in turn produces radiation — in this case, radio waves [2] and aurorae.

The fact that brown dwarfs are radio emitters allowed the international collaboration of astronomers behind this result to develop a novel observing strategy. Radio emissions have previously been detected from only a handful of cold brown dwarfs — and they have been known and cataloged by infrared surveys before being observed with radio telescopes. The team decided to flip this strategy, using a sensitive radio telescope to discover cold, faint sources and then perform follow-up infrared observations with a large telescope like the 8-meter Gemini North telescope to categorize them.

“We asked ourselves, 'Why point our radio telescope at cataloged brown dwarfs?’,” said Vedantham. “Let’s just make a large image of the sky and discover these objects directly in the radio.”

Having found a variety of tell-tale radio signatures in their observations, the team had to distinguish potentially interesting sources from background galaxies. To do so, they searched for a special form of light that was circularly polarized [3] — a feature of light from stars, planets, and brown dwarfs, but not from background galaxies. Having found a circularly polarized radio source, the team then turned to telescopes including Gemini North and the NASA IRTF to provide the measurements required to identify their discovery.

Gemini North is equipped with a variety of infrared instruments, one of which is usually kept ready to observe when an interesting astronomical opportunity arises. In the case of BDR J1750+3809, Gemini’s mainstay infrared imager, the Near InfraRed Imager and spectrograph (NIRI) , was not available — so Gemini astronomers took the unusual step of using the acquisition camera for the Gemini Near-Infrared Spectrograph (GNIRS) instead. Thanks to the careful work and foresight of Gemini staff, this camera provided deep, sharp, and accurate imaging at several infrared wavelengths.

“These observations really highlight the versatility of Gemini, and in particular the little-used ‘keyhole’ imaging capability of Gemini’s GNIRS spectrograph,” commented Gemini Observatory and University of Edinburgh astronomer Trent Dupuy — a co-author of the research paper. The Gemini North observations were obtained via Director's Discretionary Time, which is reserved for programs needing small amounts of observing time with potentially high-impact results.

“This observation showcases both the flexibility and the power of the Gemini Observatories,” said Martin Still of the National Science Foundation (NSF). “This was an opportunity where Gemini’s design and operations enabled an innovative idea to develop into a significant discovery.”

“Our ultimate goal is to understand magnetism in exoplanets and how it impacts their ability to host life,” concluded Vedantham. “Because magnetic phenomena of cold brown dwarfs are so similar to what is seen in Solar System planets, we expect our work to provide vital data to test theoretical models that predict the magnetic fields of exoplanets.”

[1] The first unambiguous observation of a brown dwarf did not occur until 1995, after more than 30 years of theoretical predictions. The name of these objects was coined by the American astronomer Jill Tarter in reference to their expected color.

[2] The radiation emitted by the acceleration of charged particles in a magnetic field is referred to as cyclotron radiation. The name comes from the cyclotron, an early type of particle accelerator.

This research was presented in the paper Direct Radio Discovery of a Cold Brown Dwarf to appear in The Astrophysical Journal Letters. 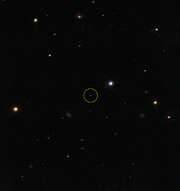 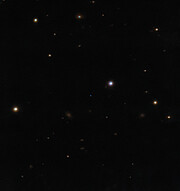