A Dizzying Show by Comet NEOWISE

When Comet NEOWISE (C/2020 F3) sped through the inner Solar System during the middle of 2020, astronomers and the general public watched in awe as this “dirty snowball” shed gas and dust into space, producing a striking show visible to the naked eye. Close-up observations, led by Michal Drahus and Piotr Guzik of Jagiellonian University in Krakow, used the international Gemini Observatory, a Program of NSF’s NOIRLab, to observe the materials escaping from the comet over time. One set of observations, obtained on 1 August 2020 from the Gemini North telescope on Hawai‘i’s Maunakea, displays a spiraling stream of molecular gas that reveals the rotation of the comet’s nucleus. The timelapse sequence, compressed to only a few seconds, represents about one fifth of the approximately 7.5-hour rotation period of the comet.

The observations, obtained under a research program to explore the rotational dynamics of the comet, took place over several evenings, and were limited by the comet’s relatively close proximity to the Sun and the resulting short observing windows. The Gemini observations allowed the researchers to determine the rotation of the comet to excellent accuracy and to look for changes in the rotation rate.

Comets consist of ices, rocks, and dust left over from the formation of our Solar System. Some comets follow highly elongated orbits which send them close to the Sun where they warm up and cause the frozen gases to vaporize, releasing molecules and debris into space. It is thought that most comets release gasses in geyser-like jets and that is what researchers think is happening in the Gemini images. As the vaporized material erupts from the comet its rotation causes it to appear to spiral outward, much like the water from a spinning garden hose. The very same material impacts the comet’s rotation causing its nucleus to spin-up or spin-down, though for most comets, the effect is too weak to detect.

This research was reported in an Astronomers Telegram. 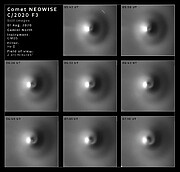