Astronomers have discovered the second most distant quasar ever found, using the international Gemini Observatory and Cerro Tololo Inter-American Observatory (CTIO), Programs of NSF’s NOIRLab. It is also the first quasar to receive an indigenous Hawaiian name, Pōniuāʻena. The quasar contains a monster black hole, twice the mass of the black hole in the only other quasar found at the same epoch, challenging the current theories of supermassive black hole formation and growth in the early Universe.

After more than a decade of searching for the first quasars, a team of astronomers used the NOIRLab’s Gemini Observatory and CTIO to discover the most massive quasar known in the early Universe — detected from a time only 700 million years after the Big Bang [1]. Quasars are the most energetic objects in the Universe, powered by their supermassive black holes, and since their discovery astronomers have been keen to determine when they first appeared in our cosmic history.

Systematic searches for these objects have led to the discovery of the most distant quasar (J1342+0928) in 2018 and now the second most distant, J1007+2115 [2]. The A Hua He Inoa program named J1007+2115 Pōniuāʻena, meaning “unseen spinning source of creation, surrounded with brilliance” in the Hawaiian language [3]. The supermassive black hole powering Pōniuāʻena is 1.5 billion times more massive than our Sun.

“Pōniuāʻena is the most distant object known in the Universe hosting a black hole exceeding one billion solar masses” said Jinyi Yang, a Postdoctoral Research Associate at the Steward Observatory of the University of Arizona.

For a black hole of this size to form this early in the Universe, it would need to start as a 10,000 solar mass “seed” black hole about 100 million years after the Big Bang, rather than growing from a much smaller black hole formed by the collapse of a single star.

“How can the Universe produce such a massive black hole so early in its history?” wondered Xiaohui Fan, Regents’ professor and associate department head of the Department of Astronomy at the University of Arizona. “This discovery presents the biggest challenge yet for the theory of black hole formation and growth in the early Universe.”

Current theory suggests that at the beginning of the Universe following the Big Bang, atoms were too distant from one another to interact and form stars and galaxies. The birth of stars and galaxies as we know them happened during the Epoch of Reionization, beginning about 400 hundred million years after the Big Bang. The discovery of quasars like Pōniuāʻena, deep into the reionization epoch, is a big step towards understanding this process of reionization and the formation of early supermassive black holes and massive galaxies. Pōniuāʻena has placed new and important constraints on the evolution of the matter between galaxies (the intergalactic medium) in the reionization epoch.

The search for distant quasars began with the research team combing through large area surveys such as the DECaLS imaging survey which uses the Dark Energy Camera (DECam) on the Víctor M. Blanco 4-meter Telescope, located at CTIO in Chile. The team uncovered a possible quasar in the data, and in 2019 they observed it with telescopes including the Gemini North telescope and the W. M. Keck Observatory both on Maunakea on Hawai‘i Island. Gemini’s GNIRS instrument confirmed the existence of Pōniuāʻena.

“Observations with Gemini were critical for obtaining high-quality near-infrared spectra which provided us with the measurement of the black hole’s astounding mass,” said Feige Wang, a NASA NHFP fellow at the Steward Observatory of the University of Arizona.

In honor of its discovery from Maunakea, this quasar was given the Hawaiian name Pōniuāʻena. The name was created by thirty Hawaiian immersion school teachers during a workshop led by the A Hua He Inoa group, a Hawaiian naming program led by the ‘Imiloa Astronomy Center of Hawai‘i. Pōniuāʻena is the first quasar to receive an indigenous name.

“In addition to the teamwork of the telescopes of NOIRLab that made this discovery possible, it is exciting to see the collaboration of science and culture in local communities, highlighted by this new name,” said Chris Davis, Program Officer at the National Science Foundation.

“I am extremely grateful to be a part of this educational experience — it is a rare learning opportunity,” said Kauʻi Kaina, a High School Hawaiian Immersion Teacher from Kahuku, Oʻahu who was involved in the naming workshop. “Today it is relevant to apply these cultural values in order to further the wellbeing of the Hawaiian language beyond ordinary contexts, such as in school, but also so that the language lives throughout the Universe.”

This research was presented in a paper to appear in The Astrophysical Journal Letters. 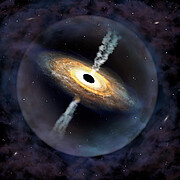 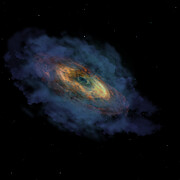