Dynamical footprints uncovered by galactic archaeologists in galaxy next door.

Astronomers have uncovered two historic events in which the Andromeda Galaxy underwent major changes to its structure. The findings shed light not only on the evolution and formation of the Andromeda Galaxy, but to our own Milky Way Galaxy as well. Two of the facilities in NSF’s National Optical-Infrared Astronomy Research Laboratory, Kitt Peak National Observatory and the International Gemini Observatory, played critical roles in the research, now published in the latest issue of the journal Nature.

Large galaxies like the one we live in, the Milky Way, are believed to grow through repeated merging with smaller, dwarf galaxies. Gas and dwarf galaxies in the vast cosmic web follow the gravitational paths laid out by dark matter — traversing filaments, they migrate slowly toward collections of dark matter and assemble into large galaxies. As dwarf galaxies are pulled in by gravity, they are also pulled apart, leaving behind long trailing streams of stars and compact star clusters.

Astronomers have uncovered evidence for two major migration events in the history of our large galactic neighbor, the Andromeda Galaxy (also known as M31). The more recent migration event occurred a few billion years ago and the older event many billions of years before that. The evidence for the two events comes from “galactic archaeology,” the use of the motions and properties of stars and stellar clusters to reconstruct the formation and evolutionary history of galaxies.

In the case of the Andromeda Galaxy, the team of galactic archaeologists, led by Dougal Mackey (Australian National University) and Professor Geraint Lewis (University of Sydney), measured the velocities of 77 of the Andromeda Galaxy’s compact star clusters, using the 4-meter Mayall telescope at Kitt Peak National Observatory, the 8-meter Gemini North telescope on Maunakea, Hawai‘i, and other facilities. The star clusters are all located in the outer halo of the galaxy. The outer regions of the galaxy are of particular interest because the dynamical signature of migration events persists longer there.

“By tracing the faint remains of dwarf galaxies with star clusters, we’ve been able to recreate the way the Andromeda Galaxy drew them in at different times, from what’s known as the ‘cosmic web’ of matter that threads the Universe,” Lewis said.

The team found that the star clusters divide into two populations, a young group associated with stellar streams, and an older group that has no such association. The two populations both orbit the Andromeda Galaxy, but their orbital axes are nearly perpendicular to each other.

The different orbits are evidence for two distinct accumulation events. The stellar streams associated with the more recent event are still present, but streams from the older event are long gone.

According to Mackey, reconstructing the formation history of the Andromeda Galaxy provides insights into the history of our own galaxy, the Milky Way.

“One of our main motivations in studying astronomy is to understand our place in the Universe. A way of learning about the Milky Way is to study galaxies that are similar to it, and try to understand how these systems formed and evolved.” Studying the Andromeda Galaxy, “can actually be easier than looking at the Milky Way. Because we live inside it, that can make certain types of observations quite difficult,” Mackey said.

Astronomer Knut Olsen of NSF’s National Optical-Infrared Astronomy Research Laboratory, who studies the formation of galaxies but was not part of the study said, “This work shows that galaxies as massive as the Large Magellanic Cloud have merged with the Andromeda Galaxy at least twice in its history.” The Large Magellanic Cloud is a companion galaxy to the Milky Way that is easily visible to the naked eye in the Southern hemisphere. Olsen added, “If we could have observed these events taking place billions of years ago, we would have been treated to a real display of cosmic fireworks as new stars formed!”

“This is a great example of NSF-sponsored facilities being used in unison to unravel the mysteries of our neighbor galaxy M31, something that NSF’s National Optical-infrared Astronomy Research Laboratory should make much easier,” noted Ralph Gaume, Division Director for NSF’s Division of Astronomical Sciences. 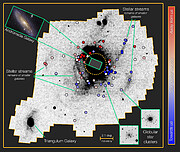