The National Solar Observatory at Sacramento Peak announces the 19th Annual International Workshop to take place in Sunspot, New Mexico, from September 28 to October 2, 1998. Titled "High Resolution Solar Physics: Theory, Observations, and Techniques", this year's workshop features the most recent high spatial and temporal resolution observations of the solar atmosphere. About 75 scientists are expected to attend, nearly half from outside the US. Contact information is listed below for media representatives interested in attending the workshop.

Scientific questions to be discussed at the workshop include: How do small scale features observed in the Sun's photosphere drive physical processes in the upper solar atmosphere and the corona? What is the relation of weak magnetic fields observed all over the solar surface to the Sun's 11 year cycle? Can we observe surface dynamo magnetic field generation on granular convective scales? What are the smallest observable solar magnetic elements? What triggers solar flares and coronal mass ejections?

Recent observations from the ground and space have produced solar images of spectacular resolution. Advances in groundbased observations, such as frame selection and image reconstruction, complement spacebased observations from SOHO and TRACE to dramatically enhance our understanding of magnetic field concentrations, weak magnetic fields, flux tube physics, coronal loop interactions, magnetic canopies, and photospheric flows and dynamics. Nevertheless, theoretical models and numerical simulations show that key physical processes occur on scales below those currently resolved. New observational techniques, further developments in image processing and data analysis, and continued advances in both ground and spacebased instrumentation are essential to understand the magneto hydrodynamics of the solar convective zone and atmosphere.

The NSO/SP High Resolution Solar Physics Workshop will review recent progress in the areas of theoretical modeling and observations of magneto convective physics on scales between 100 km and 1000 km (i.e. scales between 1/20000 and 1/2000 of the diameter of the Sun). Techniques for achieving high resolution observations including new technologies like adaptive optics, next generation solar telescopes and proposed high resolution space missions such as Solar-B will be discussed.

A major goal of the workshop is to produce a proceedings that reviews our current understanding of fundamental physical processes occurring on the Sun at small spatial scales and the state-of-the-art of instrumentation used to achieve high resolution observations. The workshop will also attempt to define the needs for future telescopes on the ground and in space. The Astronomical Society of the Pacific will publish the proceedings. 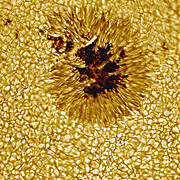