A new chapter opens today in the history of the 4-m Mayall telescope, the largest aperture telescope at NSF’s Kitt Peak National Observatory (KPNO). Having completed its first 45-year-long assignment, the telescope is now poised to embark on a new mission: creating the largest 3-dimensional map of the cosmos to date. The map will help astronomers chart out the role of dark energy in the expansion history of the Universe.

When the Mayall first opened its eye to the sky 45 years ago, it was one of the largest optical telescopes in existence. Designed to be versatile, its mission was to assist astronomers in addressing the wide diversity of astronomical questions facing the field. Tremendously successful, it played an important role in many astronomical discoveries, such as establishing the role of dark matter in the Universe from measurements of galaxy rotation, and determining the scale and structure of the Universe.

Today it sheds its identity as an “all-purpose research tool” and, reinventing itself, turns to a new dedicated mission that will tackle one of the most profound problems in physics: understanding the mysterious physics of dark energy, an unknown form of energy that is believed to permeate all of space and accelerate the expansion of the Universe.

To prepare for its new mission, the Mayall will close temporarily. Over the next 15 months, it will undergo the largest overhaul in its history in preparation for the installation of the Dark Energy Spectroscopic Instrument (DESI) , a massively parallel optical spectrometer capable of measuring the spectra of 5000 astronomical objects simultaneously.

Describing the upcoming transformation, KPNO Director Lori Allen explained, “The entire top end of the telescope, which weighs as much as a school bus and houses the telescope’s secondary mirror and a large digital camera, will be removed and replaced with DESI instruments.” A large crane will lift the telescope’s top end through the observing slit in its dome.

“This day marks an enormous milestone for us,” said DESI Director Michael Levi of the Department of Energy’s Lawrence Berkeley National Laboratory (Berkeley Lab), which is leading the project’s international collaboration. “Now we remove the old equipment and start the yearlong process of putting the new stuff on.” More than 465 researchers from about 71 institutions are participating in the DESI collaboration.

The Kitt Peak staff can’t wait to get started. “We’re fired up to get the Mayall ready for its next big adventure!” exclaimed David Sprayberry, KPNO Site Director for DESI.

Richard Green, Director of the NSF’s Division of Astronomical Sciences, added, “We are extremely pleased that the Mayall telescope, a core asset of the National Science Foundation, can be so advantageously deployed for collaborative forefront science with the Department of Energy.”

The Makings of a Second Career

With its sturdy construction and ability to view a large swath of sky at a time, the Mayall is the perfect partner for DESI.

“We started the DESI project by surveying the large telescopes in the world to find one that had a suitable mirror and wouldn’t collapse under the huge weight of the instrument,” said Berkeley Lab’s David Schlegel, a DESI Project Scientist. The DESI instrument weighs 9 tons.

Luckily, the Mayall was “precociously engineered like a battleship and designed with a wide field of view, a relatively rare feature among large telescopes,” explained Arjun Dey, the NOAO Project Scientist for DESI. “The redesign maintains the original intent of the facility as a wide-field telescope, but we are now taking that to its practical limit!” added Lori Allen.

The expansion of the telescope’s field-of-view, from less than 1 square degree to 8 square degrees, or approximately 40 times the area of the full moon, will allow DESI to map out about one-third of the sky.

From Photographic Plates to 5000 Robotic Eyes on the Sky

In its new incarnation, the Mayall will be going ultra-high-tech, a world away from the imaging technology of its early days.

When DESI is installed, it will come equipped with a state-of-the-art array of 5,000 swiveling robots, each carefully choreographed to point a fiber-optic cable at a preprogrammed sequence of galaxies and quasars. Quasars are galaxies that harbor actively feeding, massive black holes. The fiber-optic cables will carry the light from these objects to 10 spectrographs. The cylindrical, fiber-toting robots will reposition to capture a new spectrum roughly every 20 minutes.

Over a five-year period, DESI will survey 30 million galaxies and quasars and create the largest map to date of the Universe out to a distance of 10 billion light years. The survey will commence in early 2020.

The Mayall telescope has already been engaged in scientific preparations for the DESI survey, carrying out a sky survey known as the Mayall z-Band Legacy Survey (MzLS), one of four surveys that DESI will use to select the galaxies and quasars that it will study. The MzLS wrapped up yesterday, with the final science observations taken by the Mayall before its transformation. Data from the MzLS and other surveys have been released to the public and can be explored online.

Kitt Peak National Observatory (KPNO) is part of the National Optical Astronomy Observatory (NOAO), which is operated by the Association of Universities for Research in Astronomy (AURA) under a cooperative agreement with the National Science Foundation (NSF). NSF is an independent federal agency created by Congress in 1950 to promote the progress of science. NSF supports basic research and people to create knowledge that transforms the future. DESI scientists are honored to be permitted to conduct astronomical research on Iolkam Du’ag (Kitt Peak), a mountain with particular significance to the Tohono O’odham Nation. 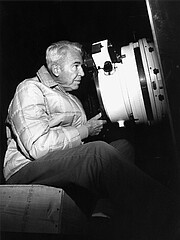 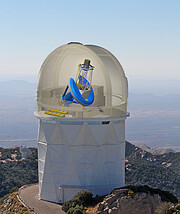