Gargantua in the Mist

A Precocious Black Hole Behemoth at the Edge of Cosmic Dawn

Supermassive black holes lurk at the centers of many galaxies. While some — like the black hole at the center of our own Galaxy — live quiet lives, occasionally snacking on a star or two, others feed voraciously, consuming gas and stars and growing rapidly in mass.

To understand when supermassive black holes first appeared, astronomers scan the skies for actively-feeding black holes (known as “quasars”) from the Universe’s distant past. The latest discovery, by a team led by Eduardo Bañados (Carnegie Observatories) and published today in the journal Nature, is a record-breaker: J1342+0928, the most distant quasar known.

The new quasar is spotted at a redshift of 7.54, when the Universe was only 690 million years old, or 5% of its current age. The Universe was rapidly changing at this time. The first galaxies were appearing, and their energetic radiation had begun to ionize the surrounding intergalactic gas, illuminating and forever transforming the Universe from neutral to ionized. The discovery that the new quasar resides in a primarily neutral Universe places it solidly in this era, at the edge of cosmic dawn.

Despite its young age, the quasar harbors a whopper of a black hole, 800 million times the mass of the Sun.

For coauthor Xiaohui Fan (University of Arizona), it is amazing to discover so massive a black hole so early in cosmic history. “The new quasar is itself one of the first galaxies, and yet it already harbors a behemoth black hole as massive as others in the present-day Universe!” he remarked. The discovery challenges our understanding of the early growth of supermassive black holes and their host galaxies.

NOAO and Gemini Data Critical to the Discovery

Quasars like J1342+0928 are rare. The study that revealed the existence of J1342+0928 searched one-tenth of the entire sky, yielding only one quasar at this epoch. To pick out these rare sources from the millions of sources in the sky, the research team employed a clever selection technique. They used archival data to search for sources that are bright in the infrared (beyond 1 micron) but undetected in the z-band (just shortward of 1 micron).

Deep z-band data covering a large swath of sky was therefore critical to the study. Luckily just such a data set is now available from the DECam Legacy Survey (DECaLS) that is being carried out with the Dark Energy Camera on the Blanco 4-m telescope at the Cerro Tololo Inter-American Observatory. The research team also used infrared data sets from the Wide-field Infrared Survey Explorer (WISE), and the United Kingdom Infrared Telescope Infrared Deep Sky Survey (UKIDSS) Large Area Survey. Spectra taken with the near-infrared spectrograph on the Gemini North Telescope were used to measure the mass of the black hole.

“Paradoxically, the non-detection of this source in the DECaLS data is what makes it so interesting and identifies it as a very distant object,” explained David Schlegel (Lawrence Berkeley National Laboratory), one of the co-leads of the DECaLS survey.

Commenting on the research team’s use of the archival DECaLS data, Arjun Dey (National Optical Astronomy Observatory), the other co-lead of the DECaLS survey, remarked, “DECaLS was designed from the ground up as a public project, so it is wonderful to see the data enabling exciting discoveries that are pushing the boundaries of the known Universe.”

“A significant discovery like this is the hoped-for result of NSF Astronomy’s investment in facilities, major surveys, and extraordinary investigator teams with targeted follow-up,” said Richard Green, Director of the NSF’s Division of Astronomical Sciences. Cerro Tololo Inter-American Observatory is part of the National Optical Astronomy Observatory (NOAO). Both NOAO and Gemini are funded by the National Science Foundation (NSF).

From a Precocious Youth to Staid Middle Age?

Coauthor Fan speculates that the new quasar, as remarkable as it is, is “probably just an early bloomer. If it is located in a denser than average part of the Universe, it could get an earlier start in life and grow more quickly.” Fan suspects that despite its precocious youth, J1342+0928 eventually settled down to life at a more measured pace, becoming a more typical supermassive black hole at the center of a large elliptical galaxy.

The reported discovery is part of a long-term search for the earliest quasars led by Fabian Walter and Bram Venemans of the Max Planck Institute for Astronomy. The research team is adopting a similar strategy in its exploration of a larger area of sky to track down and study the earliest quasars. How long will J1342+0928 remain the record holder? Only time will tell!

PR Image noao1707a
Gargantua in the Mist: A Precocious Black Hole Behemoth at the Edge of Cosmic Dawn

PR Image noao1707b
Gargantua in the Mist: A Precocious Black Hole Behemoth at the Edge of Cosmic Dawn 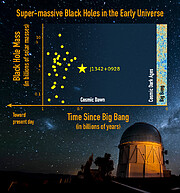 PR Image noao1707c
Gargantua in the Mist: A Precocious Black Hole Behemoth at the Edge of Cosmic Dawn

PR Image noao1707d
Gargantua in the Mist: A Precocious Black Hole Behemoth at the Edge of Cosmic Dawn