The precious elements in our Earth-bound bling, gold and platinum, are thought to have been forged in ancient fiery cataclysms, when pairs of neutron stars spiraled together and merged into black holes. A similar event, the merger of a neutron star binary, was recently detected in gravitational waves by two gravitational wave observatories (Advanced LIGO and Virgo) and at optical-infrared wavelengths by the Blanco, SOAR, and SMARTS 1.3m telescopes at the Cerro Tololo Inter-American Observatory (CTIO) and the Gemini South telescope on Cerro Pachón. The detected optical emission, the first optical counterpart to a gravitational wave event, confirms that binary neutron star mergers are indeed major cosmic production sites of rare heavy elements.

Merging neutron star binaries are exotic events that are predicted to generate both gravitational waves – ripples in spacetime first predicted by Einstein – and bright emission at optical and infrared wavelengths. The gravitational waves launched by the closely orbiting neutron stars carry away energy, which causes the stars to spiral together and merge into a black hole.

As the stars merge, they experience huge gravitational tides. Hot, dense neutron-rich matter ejected in the merger forms unstable elements, which decay radioactively into stable elements, thereby enriching the cosmos with rare heavy elements like gold, silver, and platinum. The energy released powers emission at optical and infrared wavelengths (an “optical counterpart”) that is extremely bright, up to one thousand times brighter than a nova but much fainter than a supernova, hence the name of the anticipated emission, a “kilonova”.

While widely anticipated as a cosmic source of rare heavy elements and of gravitational waves, a binary neutron star merger had not been detected with confidence until now.

On 17 August 2017, the Advanced LIGO and Virgo observatories detected, in the direction of the constellation Hydra, a gravitational wave event with the signature of a binary neutron star merger, GW170817. Two teams of astronomers, one led by Edo Berger (Harvard-Smithsonian Center for Astrophysics), in partnership with the Dark Energy Survey Collaboration, and another led by Mansi Kasliwal (Caltech), leaped into action to search for the optical counterpart.

Because the positional uncertainty of the LIGO event was large (more than 50 square degrees or more than 250 times the area of the full moon), Berger’s team first deployed the Dark Energy Camera (DECam), a wide-field camera on the 4-m Blanco telescope at CTIO. With DECam capable of scanning 3 square degrees of sky at a time, the team was able to quickly survey a 70 square degree region and detect, with high confidence, the optical counterpart to the gravitational wave event: a bright new source associated with NGC 4993, an elliptical galaxy 130 million light years away.

Continued imaging with DECam and spectroscopy with the SOAR telescope, also located at CTIO, over the following 10 nights revealed that the detected optical emission matched the expected brightness and color evolution of a merging neutron star binary, a “kilonova”.

The data show that 0.6 days after the merger, the optical emission was produced by hot gas with a temperature of about 8000 K, a size roughly that of Neptune’s orbit, and a luminosity of 100 million times the Sun, expanding at about one-third the speed of light. The emission became redder and fainter with time, declining, after 10 days, to a luminosity of only 1 million times the Sun.

SOAR Observatory Director Jay Elias, who coordinated the SOAR follow up effort, commented that “When we started the follow up, we were concerned that the light we were seeing might be from an unrelated supernova from the same region of the sky rather than the optical counterpart. That explanation became more unlikely as the observations progressed.”

Bethany Cobb (George Washington University), a member of Kasliwal’s team, used Andicam on the SMARTS 1.3m telescope at CTIO to follow the fading infrared glow from the source over 10 nights. Cobb was astonished that the “emission was so bright! It was thrilling!”

Both Kasliwal’s team and Berger’s team also used the 8-m Gemini South telescope to follow the evolution of the infrared spectrum of the source. NOAO is the US gateway to the Gemini Observatory. Using the spectra from SOAR and Gemini, the teams studied in detail the composition of the material ejected in the merger.

A Holy Grail of Astronomy

“The joint detection of light and gravitational waves from cosmic sources is one of the holy grails of present-day astronomy,” exclaimed Marcelle Soares-Santos (Fermi National Accelerator Laboratory and Brandeis University), the first author of the paper from Berger’s team that reports their discovery of the optical counterpart. Both signals, light and gravitational waves, contribute unique information about extreme astrophysical events. As Soares-Santos explained, “Gravitational waves tell us about the motions and masses of the neutron stars, and light reveals the astrophysics of the event — what happened exactly as the stars merged, the mass of heavy elements produced.”

The results obtained by the two teams help to establish GW170817 as the first confident detection of a binary neutron star merger. Earlier reported sightings of kilonovae lacked the definitive evidence of a gravitational wave signature. “Great claims require great evidence,” says Kasliwal, “and the evidence for GW170817 is undeniable.”

The results also establish that binary neutron star mergers are major cosmic production sites of rare heavy elements. The Berger team’s results are published in the Astrophysical Journal Letters and the Kasliwal team’s results in Science.

“A New Era of Astronomy”

GW170817 is also, more generally, the first gravitational wave event with an optical counterpart. The four previous gravitational wave detections were of merging black hole binaries, which did not generate an observable optical counterpart. Astronomers are thrilled to get in on the action. “It’s the dawn of a new field of astronomy!” proclaimed Berger.

The discovery foretells a bright future for wide-field imagers and facilities optimized for the study of time variable events. According to Berger, this discovery “demonstrates the power and importance of DECam for optical follow-up of gravitational wave sources.” Looking to the future, toward future LIGO and Virgo observing runs, Berger anticipates that “with its high sensitivity and ability to survey large areas of sky, DECam will play an almost unique role in the identification of future gravitational wave events.”

The discovery also highlights important unanswered questions and future opportunities. “The big outstanding question is whether this event is typical of all binary neutron star mergers,” says Matt Nicholl (Harvard-Smithsonian Center for Astrophysics), the lead author of the paper reporting the SOAR results. As LIGO and Virgo detect more sources, we’ll find out. “We’ll discover how diverse neutron star mergers are, how often they occur, and therefore how much of all the heavy elements in the Universe come from binary neutron star mergers.”

The National Science Foundation supports LIGO as well as facilities involved in pinpointing and studying the optical counterpart to GW170817, including CTIO and Gemini Observatory. 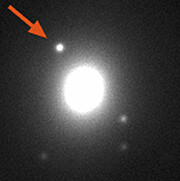 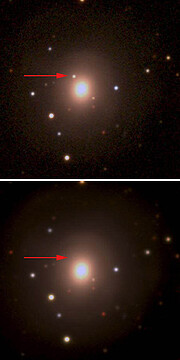 PR Video noao1705a
That Gold on Your Finger May Be Dust from a Neutron Star!

PR Video noao1705b
Going out with a bang!