Tonight, as the sun sinks below the horizon, the world’s most powerful digital camera will once again turn its gleaming eye skyward. Tonight, and for hundreds of nights over the next five years, a team of physicists and astronomers from around the globe, working from an observatory in Chile, will use this remarkable machine to try to answer some of the most fundamental questions about our universe.

On Aug. 31, the Dark Energy Survey (DES) officially began. Scientists on the survey team will systematically map one-eighth of the sky (5000 square degrees) in unprecedented detail. The start of the survey is the culmination of ten years of planning, building, and testing by scientists from 25 institutions in six countries.

The survey’s goal is to find out why the expansion of the universe is speeding up, instead of slowing down due to gravity, and to probe the mystery of dark energy, the force believed to be causing that acceleration.

“The Dark Energy Survey will explore some of the most important questions about our existence,” said James Siegrist, Associate Director for High Energy Physics at the U.S. Department of Energy’s Office of Science. “In five years’ time, we will be far closer to the answers, and far richer in our knowledge of the universe.”

“With the start of the survey, the work of more than 200 collaborators is coming to fruition,” said DES Director Josh Frieman of the U.S. Department of Energy’s Fermi National Accelerator Laboratory. “It’s an exciting time in cosmology, when we can use observations of the distant universe to tell us about the fundamental nature of matter, energy, space, and time.”

The main tool of the survey is the Dark Energy Camera, a 570-megapixel digital camera built at Fermilab in Batavia, Illinois, and mounted on the 4-meter Victor M. Blanco telescope at the National Science Foundation’s Cerro Tololo Inter-American Observatory in the Andes Mountains in Chile. The camera includes 5 precisely shaped lenses, the largest nearly a yard across, that together provide sharp images over its entire field of view.

The Dark Energy Camera is the most powerful survey instrument of its kind. With each snapshot, it will be able to see light from more than 100,000 galaxies up to 8 billion light years away.

“The start of the Dark Energy Survey is an important milestone,” said CTIO Director Nicole van der Bliek. “The Dark Energy Camera, in conjunction with the Blanco telescope here at CTIO, will greatly increase our understanding of the forces that control the expansion of our universe.”

Over five years, the survey will obtain color images of 300 million galaxies and 100,000 galaxy clusters and will discover 4,000 new supernovae, many of which were formed when the universe was half its current size. The data collected will be processed at the National Center for Supercomputing Applications (NCSA) at the University of Illinois in Urbana, and then delivered to collaboration scientists and the public.

“NCSA is pleased to be producing and distributing the refined data products that will enable this science,” said Don Petravick, principal investigator of the DES Data Management Operation.

The survey’s observations will not be able to see dark energy directly. However, by studying the expansion of the universe and the growth of large-scale structure over time, the survey will give scientists the most precise measurements to date of the properties of dark energy.

“We’re looking at this big galaxy map of the universe as a way of finding evidence for dark energy and characterizing its nature with cosmic epoch,” said Ofer Lahav of University College London and head of the DES Science Committee. “An even more challenging goal for DES is to tell if what causes the acceleration of the universe is indeed dark energy, or something entirely different.”

The survey will use four methods to probe dark energy:

The Dark Energy Survey is supported by funding from the U.S. Department of Energy Office of Science; the National Science Foundation; funding agencies in the United Kingdom, Spain, Brazil, Germany and Switzerland; and the participating institutions.

More information about the Dark Energy Survey, including the list of participating institutions, is available at the project website.

Released by Fermilab, the National Optical Astronomy Observatory (NOAO) and the National Center for Supercomputing Applications on behalf of the Dark Energy Survey collaboration. NOAO is operated by the Association of Universities for Research in Astronomy (AURA), Inc. under cooperative agreement with the National Science Foundation.

Fermilab is America’s premier national laboratory for particle physics research. A U.S. Department of Energy Office of Science laboratory, Fermilab is located near Chicago, Illinois, and operated under contract by the Fermi Research Alliance, LLC. Visit Fermilab’s website at www.fnal.gov and follow us on Twitter at @FermilabToday.

The DOE Office of Science is the single largest supporter of basic research in the physical sciences in the United States, and is working to address some of the most pressing challenges of our time. For more information, please visit science.energy.gov. 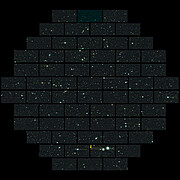