Stars are known to form in dense clouds of gas and dust, but why do some regions show prodigious rates of star formation, while others barely produce any young stars at all? Many of the richest sites are found in distant galaxies: the name “starburst” is applied to them. Now, a team has identified a region in our own galaxy that may deserve this title, and help explain what leads to the furious production of new stars in a starburst region.

This region, NGC 6334 or informally named the Cat’s Paw Nebula, is rich in gas and dust. Long known to contain very massive young stars, NGC 6334 lies in the constellation Scorpius, toward the galactic center at a distance of about 5,500 light years, and practically in the plane of the Milky Way. It is the massive, hottest stars, classified by astronomers as type O, that cause the gas surrounding them to glow in the optical spectrum.

Imaging done at the NOAO Blanco 4-meter telescope at Cerro Tololo Inter-American Observatory, Chile, combined with data from the Spitzer Space Telescope, have enabled the team, led by Sarah Willis (Iowa State University), to catalog much fainter young stars in NGC 6334 than has been done before. Figure 1 shows combined images from space and ground-based telescopes. In this false color composite, blue is assigned to a ground-based image, green to a longer-wavelength image from †he Spitzer Space Telescope, and red to an even longer-wavelength image from the Herschel Space Telescope. The ground-based data were taken with the NOAO Extremely Wide-Field Infrared Imager, or NEWFIRM. (Figure 2).

“The study of NGC 6334 is a major component of Sarah Willis’ PhD thesis which is aimed to bridge the gap between the distant starburst galaxies and their relatively modest counterparts in our own galaxy.” says Massimo Marengo (Iowa State) who is Willis’ thesis advisor.

Starting from the brightest and most massive stars in the region, the team has identified and catalogued all the stars down to those with the brightness of the sun - approximately a million times fainter. Then, based on previous knowledge of the number of stars that form as a function of stellar mass, they can extrapolate to identify how many lower mass stars exist in the region. This is analogous to saying that if we observe the adult population in a town, we can estimate how many children live in the town, even if we can’t see them. In this way, the team can derive an estimate of the total number of stars in the region, and the efficiency with which stars are forming.

As team member Lori Allen (NOAO) says, “The observations acquired with NEWFIRM allowed us to identify and separate out the large number of contaminating sources, including background galaxies and cool stellar giants in the Galactic plane to obtain a more complete census of the newly-formed stars”. The team finds that the star formation rate in this region is equivalent to 3600 solar masses of gas becoming stars every million years – a tremendous rate even by astronomical standards.

National Optical Astronomy Observatory (NOAO) is operated by the Association of Universities for Research in Astronomy Inc. (AURA) under a cooperative agreement with the National Science Foundation. 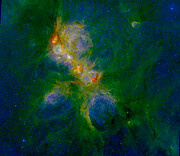 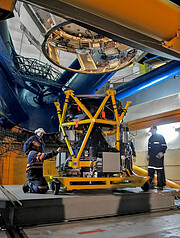