For centuries, humans have pondered what life on other planets beyond our solar system might be like. With the launch of the Kepler Spacecraft in 2009 we now have evidence for the widespread existence of such planets. Kepler’s discovery of hundreds of planet candidates around other stars has inspired a new book that combines both science and science fiction: A Kepler’s Dozen: Thirteen Stories about Distant Worlds that Really Exist. This anthology is co-edited by David Lee Summers (author of The Pirates of Sufiro and editor of Space Pirates) and Dr. Steve Howell (Kepler Project Scientist). (Fig. 1)

Each individual story in this book is prefaced by actual scientific data for a particular planet and its host star, based on Kepler discoveries and follow-up. This gives the reader a feel for the type of sun and planets that exist in these alien solar systems. For example, a story titled “A Mango and two Peanuts” deals with Kepler 37, a star just slightly cooler and less massive than our own sun, now identified as having three planets in orbit around it, all smaller than earth.

The Kepler satellite, in orbit around the sun, stares at a region of the northern hemisphere sky sandwiched between the bright stars Vega and Deneb. Attached to the telescope is the largest imaging camera ever flown into space—16 million pixels—the only instrument on the telescope and the one used to monitor all the stars in its search for planets. Planets are detected if they pass in front of their parent sun, causing a very slight dip in the star’s brightness. When this dip repeats periodically, it reveals the presence of a possible planet, the length of the planet’s “year”, and other information.

The location of the 13 stars featured in this book are marked in the Kepler field, shown over Kitt Peak National Observatory (KPNO) in Figure 2, and numbered using astronomical convention. The planets themselves are named after their host star followed by a lower case letter. For example, the first planet orbiting the star named Kepler 17 would be called Kepler 17b. The next would be Kepler 17c and so on. Kepler 17a is the star itself, and the “a” is simply not used.

To date, the Kepler satellite has identified a remarkable 2500 candidate planets around other stars: however, confirmation of their existence requires further observations from ground-based telescopes. All 13 extrasolar planets featured in this book have been observed from KPNO at either the Mayall 4-meter telescope (seen in fig 2) or the WIYN 3.5-meter. Such followup observations include gathering spectra of these stars, which tell astronomers far more about the system. (The star field shown in Fig 2 was taken with a diffraction grating which shows the spectra, or rainbow, of the brighter stars.) 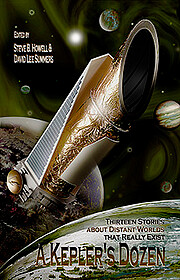 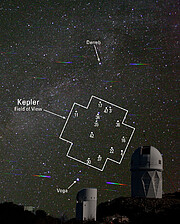