On February 15, asteroid 2012 DA14 passed extraordinarily close to the earth. Unlike the unexpected asteroid collision over Russia that day, this encounter never presented any danger but astronomers were eager to observe the event. An international team led by Nicholas Moskovitz (MIT) observed the asteroid with a number of telescopes, including the 2.1m telescope at Kitt Peak National Observatory: the accompanying video shows the asteroid as it was leaving the vicinity of the earth. As Dr. Moskovitz said, “Flybys like this, particularly for objects smaller than 2012 DA14, are not uncommon. This one was special because we knew about it well in advance so that observations could be planned to look at how asteroids are effected by the Earth’s gravity when they come so close.” In this movie, the asteroid is seen moving across a field about one third the size of the full moon in about 45 minutes. The field is located in the constellation of the Little Dipper: north is to the left and east is down.

The solar system is home to myriads of asteroids, small bodies left over from its formation. More are discovered every year. Only the largest asteroids are truly spherical, drawn into this shape by their self-gravity: most appear to be completely irregular in shape. They rotate with periods that are generally a matter of hours. And they have a wide range of compositions, from dense iron metal to low density rocks rich in organic compounds. Asteroids are often described as rubble piles, or loosely bound collections of smaller rock fragments. But these characteristics are not well understood, which is what led Dr. Moskovitz and his team to their study.

The team are analyzing their data to measure any changes in the rotation rate of the asteroid after its close encounter with the Earth. Although asteroids are generally too small to resolve with optical telescopes, their irregular shape causes their brightness to change as they rotate. Measuring the rotation rate of the asteroid in this way allows the team to test models that predict how the earth’s gravity can affect close-passing asteroids. This will lead to a better understanding of whether objects like 2012 DA14 are rubble piles or single solid rocks. This is critical to understanding the potential hazards that other asteroids could pose if they collide with the Earth.

The first asteroids were discovered orbiting the Sun in the space between Mars and Jupiter, but recent discoveries make it clear that they are found throughout the solar system. Of particular interest from most people’s point of view are those characterized as near-earth asteroids. These are objects whose orbits cross that of the earth and allow them to make a close pass to our planet, with the potential of colliding on one of those passes. These asteroids include 2012 DA14 which was discovered just a year ago. Its orbit is similar to the earth, with a period of 366 days, but with a more elliptical shape and an inclination of 11 degrees to the plane of the earth’s orbit around the sun. Following its discovery and the recognition that it would make a very close pass on Feb 15, 2013 the team planned an observing campaign using telescopes in both the northern and southern hemisphere, including facilities in Australia, New Zealand, Tasmania, South Africa, Spain, Israel, Hawaii, Massachusetts, and Arizona.

2012 DA14 is not expected to visit the vicinity of the earth any time for at least the next century, but as we saw with the impact in Russia on the same day as the flyby, there are many thousands of near-Earth asteroids out there that can be dangerous. Observing campaigns like the present one will mean that scientists will have a much better understanding of the properties of near-earth asteroids, and their potential for making trouble should they get too close!

Dr. Moskovitz is supported as an NSF fellow through the Astronomy and Astrophysics Postdoctoral Fellowship program)

The National Optical Astronomy Observatory, which manages Kitt Peak, is operated by Association of Universities for Research in Astronomy Inc. (AURA) under a cooperative agreement with the National Science Foundation. 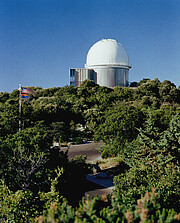 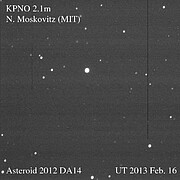