NOAO: New Insight into the Bar in the Center of the Milky Way

It sounds like the start of a bad joke: do you know about the bar in the center of the Milky Way Galaxy? Astronomers first recognized almost 80 years ago that the Milky Way Galaxy, around which the sun and its planets orbit, is a huge spiral galaxy. This isn’t obvious when you look at the band of starlight across the sky, because we are inside the galaxy: it’s as if the sun and solar system is a bug on the spoke of a bicycle wheel. But in recent decades astronomers have suspected that the center of our galaxy has an elongated stellar structure, or bar, that is hidden by dust and gas from easy view. Many spiral galaxies in the universe are known to exhibit such a bar through the center bulge, while other spiral galaxies are simple spirals. And astronomers ask, why? In a recent paper Dr. Andrea Kunder, of Cerro Tololo Inter-American Observatory (CTIO) in northern Chile, and a team of colleagues have presented data that demonstrates how this bar is rotating.

As part of a larger study dubbed BRAVA, for Bulge Radial Velocity Assay, a team assembled by Dr. R. Michael Rich at UCLA, measured the velocity of a large sample of old, red stars towards the galactic center. (See image) They did this by observing the spectra of these stars, called M giants, which allows the velocity of the star along our line of sight to be determined. Over a period of 4 years almost 10,000 spectra were acquired with the CTIO Blanco 4-meter telescope, located in the Chilean Atacama desert, resulting in the largest homogeneous sample of radial velocities with which to study the core of the Milky Way. Analyzing the stellar motions confirms that the bulge in the center of our galaxy appears to consist of a massive bar, with one end pointed almost in the direction of the sun, which is rotating like a solid object. Although our galaxy rotates much like a pinwheel, with the stars in the arms of the galaxy orbiting the center, the BRAVA study found that the rotation of the inner bar is cylindrical, like a toilet roll holder. This result is a large step forward in explaining the formation of the complicated central region of the Milky Way.

The full set of 10,000 spectra were compared with a computer simulation of how the bar formed from a pre-existing disk of stars. Dr. Juntai Shen of the Shanghai Observatory developed the model. The data fits the model extremely well, and suggests that before our bar existed, there was a massive disk of stars. This is in contrast to the standard picture in which our galaxy’s central region formed from the chaotic merger of gas clouds, very early in the history of the Universe. The implication is that gas played a role, but appears to have largely organized into a massive rotating disk, that then turned into a bar due to the gravitational interactions of the stars.

The stellar spectra also allow the team to analyze the chemical composition of the stars. While all stars are composed primarily of hydrogen, with some helium, it is the trace of all the other elements in the periodic table, called “metals” by astronomers, that allow us to say something about the conditions under which the star formed. The BRAVA team found that stars closest to the plane of the Galaxy have a lower ratio of metals than stars further from the plane. While this trend confirms standard views, the BRAVA data cover a significant area of the bulge that can be chemically fingerprinted. By mapping how the metal content of stars varies throughout the Milky Way, star formation and evolution is deciphered, just as mapping carbon dioxide concentrations in different layers of Antarctic ice reveal ancient weather patterns.

The international team of astronomy on this project has made all of their data available to other astronomers so that additional analysis will be possible. They note that in the future it will be possible to measure more precise motions of these stars so that they can determine the true motion in space, not just the motion along our line of sight.

Dr. R. Michael Rich, who conceived the BRAVA project and serves as the PI, acknowledges support for this work from NSF grant AST-0709479. Much of the radial velocity data came from the UCLA doctoral thesis of Christian Howard. 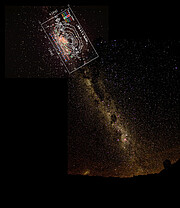