This wide-field panorama of star formation was captured with the National Science Foundation’s Mayall 4-meter telescope on Kitt Peak. Located in the constellation of Orion (the Hunter), the image show a portion of one of Orion’s giant molecular clouds (known as “Orion A”) where new stars are forming.

The bright object in the bottom-left corner is the reflection nebula NGC 1999, which contains the young star V380 Orionis. A small, triangle shaped patch of dusty material is seen in silhouette against the reflection nebula. NGC 1999 lies at the center of a network of nebulous filaments which billow out and away like the spokes of a bicycle wheel.

Many other smaller nebulous patches in this image mark small reflection nebulae, Herbig-Haro objects, and stellar jets. The rich detail in this image reveals one of the most fascinating areas of the night sky. 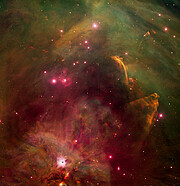