New measurements of the Kitt Peak National Observatory night sky brightness by Lowell Observatory astronomers show that, despite Tucson’s rapid growth, the sky brightness has remained remarkably constant over the past 20 years. The measurements suggest that the strengthened lighting ordinances adopted by Tucson and surrounding Pima County have been effective in suppressing the skyglow caused by outdoor lighting.

Kathryn Neugent and Philip Massey of Lowell Observatory made measurements at Kitt Peak of the night sky brightness on several nights in 2009 and 2010 and compared their results to those made by Massey and his collaborators 10 and 20 years ago. Their results are reported in the October issue of the Publications of the Astronomical Society of the Pacific. By using an instrument which breaks the light up into individual colors, (a technique known as “spectroscopy”) Neugent and Massey were readily able to measure the brightness of the night sky directly overhead, as well as in the directions of Tucson, Phoenix, Nogales, and due south of Kitt Peak. “We were very pleasantly surprised to find that Kitt Peak is just as dark now as Palomar [Observatory] was in the 1970’s, when it was considered one of the premiere dark observing sites,” Neugent said.

Their study demonstrates that human-caused light pollution has stayed nearly constant despite the large population growth in neighboring communities. In fact, the sky brightness measured overhead at Kitt Peak actually decreased slightly from the data taken ten years earlier. The amount of activity on the Sun also affects the night-time sky brightness, and the solar activity was greater ten years ago than now. When the data are corrected for this effect, the researchers find that the light pollution has increased by about 20% overhead and 30% towards Tucson compared to 20 years ago. However, compared to 10 years ago there appears to be very little change in the sky brightness. During the past 20 years the populations of Pima and Maricopa Counties have nearly doubled and Nogales and Santa Cruz County have grown substantially as well, so it is clear that light pollution is increasing at a rate much less than population growth.

The brightness of the night sky over the observatories of southern Arizona is not just an academic issue. Astronomy research in Arizona is built on a 1 billion dollar infrastructure and generates over 250 millions dollars in economic benefit each year, according to a study by the University of Arizona’s Eller College of Management. The economic impact of astronomy on the state of Arizona is the equivalent of bringing the Super Bowl and all of its associated economic activities to Arizona at least every other year.

The study concludes that lighting ordinances have preserved the night sky of Kitt Peak so far. However, maintaining the current light pollution levels in the future will require stricter controls and enforcement both outside of and within Tucson and Pima County. Lessons learned have to be applied to new lighting installations and also to older lighting that can be retrofit to be more efficient as well as astronomy-friendly. According to Dr. Abi Saha, interim director of Kitt Peak National Observatory, “their result provides an object lesson that vigilance in controlling light pollution is rewarding. It also underscores the trust that Kitt Peak can remain a vibrant site for the decades ahead, provided we continue to persevere in preserving our dark skies.” 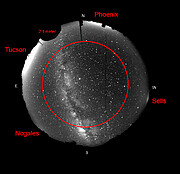