Astronomers have reported new observations of a remarkable binary star population in a well-known star cluster.

In a press release (embargoed until Dec 23, 1PM EST), Nature features two interesting studies of a class of atypical stars known as “blue stragglers”. One paper was written by Robert Mathieu and Aaron Geller, University of Wisconsin-Madison, who used the WIYN telescope at Kitt Peak National Observatory for their observations. Mathieu and Geller found that the blue stragglers in NGC 188 (Caldwell 1), an open cluster in our galaxy, have a binary fraction of 76%, which is three times the frequency for normal stars of this type. They conclude that possibly all of these stars originate in multiple star systems, and that several formation mechanisms could be operating. Geller, a PhD candidate at the University of Wisconsin-Madison, has been granted long term observing status for this project, which is part of the WIYN Open Cluster Study. 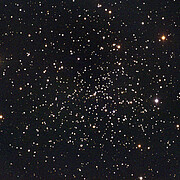