Finding a needle in a haystack might be easy compared to finding two very similar black holes closely orbiting each other in a distant galaxy.

Astronomers from the National Optical Astronomy Observatory (NOAO) in Tucson have found what looks like two massive black holes orbiting each other in the center of one galaxy. It has been postulated that twin black holes might exist, but it took an innovative, systematic search to find such a rare pair.

The newly identified black holes appear to be separated by only 1/10 of a parsec—a tenth of the distance from Earth to the nearest star. This discovery of the most plausible binary black hole candidate ever found may lead to a greater understanding of how massive black holes form and evolve at the center of galaxies. Their results are published in this week’s edition of the journal Nature.

After a galaxy forms it is likely that a massive black hole can also form at its center. Since many galaxies are found in cluster of galaxies, individual galaxies can collide with each other as they orbit in the cluster. The mystery is what happens to these central black holes when galaxies collide and ultimately merge together. Theory predicts that they will orbit each other and eventually merge into an even larger black hole.

Former NOAO Director Todd Boroson and NOAO Astronomer Tod Lauer used data from the Sloan Digital Sky Survey, a 2.5-meter diameter telescope at Apache Point in southern New Mexico to look for this characteristic dual black hole signature among 17,500 quasars discovered by the survey. More than 100,000 quasars are known, with most being found in the Sloan Digital Sky Survey and at distances that are billions of light-years away.

Quasars are the most luminous versions of the general class of objects known as active galaxies, which can be a hundred times brighter than our Milky Way galaxy, and powered by the accretion of material into supermassive black holes in their nuclei. The matter falling into the black hole doesn’t go directly in, but orbits around the black hole forming a flat accretion disc, much like the soap scum on water orbiting around an open drain.

Boroson and Lauer had to be especially careful to eliminate the possibility that they were seeing two galaxies, each with its own black hole, superimposed on each other. To try to eliminate this superposition possibility, they determined that the quasars were at the same red-shift determined distance and that there was a signature of only one host galaxy.

If the two quasars were independent objects at different distances, the spectral signature of both host galaxies should have been seen and each would have different red shift and thus different distance, even though they would be in the same line of sight. Determining the spectral signature was critical as it would be impossible to see the host galaxies directly against the glare of the quasar.

“The double set of broad emission lines is pretty conclusive evidence of two black holes,” Boroson argues. “If in fact this were a chance superposition, one of the objects must be quite peculiar. One nice thing about this binary black hole system is that we predict that we will see observable velocity changes within a few years at most. We can test our explanation that the binary black hole system is embedded in a galaxy that is itself the result of a merger of two smaller galaxies, each of which contained one of the two black holes.” The smaller black hole has a mass 20 million times that of the sun; the larger one is 50 times bigger, as determined by the their orbital velocities. 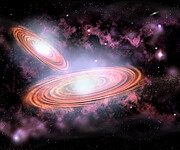