The Association of Universities for Research in Astronomy (AURA) has selected Dr. David Silva as the new director of the National Optical Astronomy Observatory (NOAO), based in Tucson, Arizona.

Silva brings a wide variety of experience to this appointment as NOAO director, from his current duties as Observatory Scientist for the Thirty Meter Telescope project in Pasadena, CA, to past responsibilities for data management and user support at the European Southern Observatory (ESO) in Germany. During a prior tenure at NOAO from 1991 to 1996, Silva served as project manager during the commissioning of the WIYN 3.5-meter telescope on Kitt Peak, and as a staff astronomer in the U.S. office of the Gemini Observatory.

In making this announcement, William Smith, President of AURA said, “Dave has more than 15 years of service at publicly funded, open access observatories. His strategic leadership and management experience will be a great asset to AURA in general and will move NOAO into an exciting future.” AURA has submitted Silva’s name to the National Science Foundation for formal approval as director.

“The AURA Board and the Observatories Council are immensely grateful to Todd Boroson for steering NOAO on a steady course, and we look forward to David Silva’s experience and energy in taking the U.S. national observatory into new ventures next decade,” said AURA Board Chair Michael Shull.

Silva’s research interests include extragalactic stellar populations, the formation and evolution of elliptical galaxies, and digital stellar libraries. In his free time, he enjoys outdoor activities such as hiking, cycling, running, and skiing.

“Exploring the universe is one of the great human endeavors, and the U.S. national observatory has a flagship role to play in this exploration,” Silva said. “Between an excellent staff, a commitment to revitalize its current facilities, an expanded program of joint endeavors with other world-class observatories such as the Gemini Observatory, and participation in the Large Synoptic Survey Telescope and Giant Segmented Mirror Telescope development programs, the future of NOAO looks brighter than it has in years. It’s an honor to have the opportunity to lead NOAO during this exciting period.”

Silva is scheduled to begin a five-year term as director on July 7.

The National Optical Astronomy Observatory (NOAO) consists of Kitt Peak National Observatory near Tucson, AZ; Cerro Tololo Inter-American Observatory near La Serena, Chile; and, the NOAO Gemini Science Center, the route for U.S. astronomers to observe with the 8-meter Gemini North and South telescopes in Hawaii and Chile, respectively. NOAO is operated by the Association of U niversities for Research in Astronomy (AURA), under a cooperative agreement with the National Science Foundation. 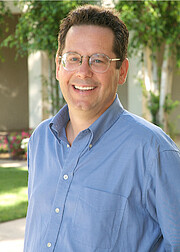